GET INKED TO SPREAD THE WORD

You are either someone who loves tattoos or hates tattoos because they tag along with you everywhere you go.

Are you looking for a cool tattoo idea? I think I’ve just found one! At least I think I have although I may be behind with the times.

Some people don’t worry about what others think of tattoos and others have felt the wrath of discrimination just because they are “different from others when they really aren’t. We are all human with a heart after all.

I find that many people who love tattoos have them as a way to express themselves or their creative side just as a photographer might with his/her portfolio or an artist with his/her paintings etc.

The only difference is tattoos are for the most part permanent unless you want to have tattoo removal. I’ve heard it’s not only as time-consuming as getting a tattoo or worse it’s costly and painful.

Why would you want to get it removed after spending all that money to get it put on? Some people do because they make split second decisions and down the line change their mind.

A relationship might end and you have your names tattooed on your body and you want them gone, that’s understandable and probably why I’d never bother getting that done.

Tattoos have been around for years and years now and some of the best and brightest men and women in our country sport some of the most creative tattoos.

I’ve seen some pretty outrageous tattoos in my time and although I don’t have any tattoos I won’t say I’ve never thought about it. I have never really had the urge to get one done though.

Some of my friends have tattoos all over their body or tattoo sleeves on their arms and some of the ladies have tattoos. Tattoos appeal to both sexes and with a tattoo comes a potential high price tag and some pain, so I’ve heard.

I’m pretty tolerant of pain but some of the stories I’ve heard make me wonder just how “not so bad” it is.  Tattoos can range in price from something reasonable under $100 to thousands of dollars especially depending on who your artist is and of course the tattoo you want done.

I’m not talking about your everyday type of advertising here for a tattoo company. Tattoo advertising goes deeper than this but potentially something that might take off, if it hasn’t already.

There are people in this world that would do just about anything for money or a freebie and with that opportunity advertisers might come knocking.

Advertising is big business and there’s not many places we go today where we don’t see .com plastered on billboards, street signs, magazines, newspapers, cups and just about everything out there.

What about the human body?

I was having my morning coffee today and reading Yahoo as always (You know I say this every weekend) when I came across this post that caught my eye. It’s not something I normally read but it was talking about tattoos, teens and McDonald’s so I just had to click on the post to read it.

I’m actually glad I did because I realized that teenagers are still making those split-second decisions and in some cases not thinking too hard about them but this one might be a golden ticket idea.

Who tattoos a receipt on their forearm? Someone who is willing to tattoo another on his other forearm that’s who… read on!

The tattoo establishment called Sabelink Tattoo was likely not shocked but shocked at the same time with this request, then it must have hit them.

If this teen is willing to tattoo a McDonald’s receipt on his arm would he have us tattoo our receipt to his other forearm free of cost? See, this is a business who is thinking smart and went from turning a free small tattoo idea into a marketing idea.

As long as he is old enough to consent to getting a tattoo and he accepts his free tattoo this business has a walking human advertising their business everywhere he goes.

Same goes for McDonald’s although they don’t need much in the way of advertising because even babies that can’t talk get excited when you say McDonald’s, it’s like a household name. Besides he got the McDonald’s tattoo on his own without any influence from the restaurant. 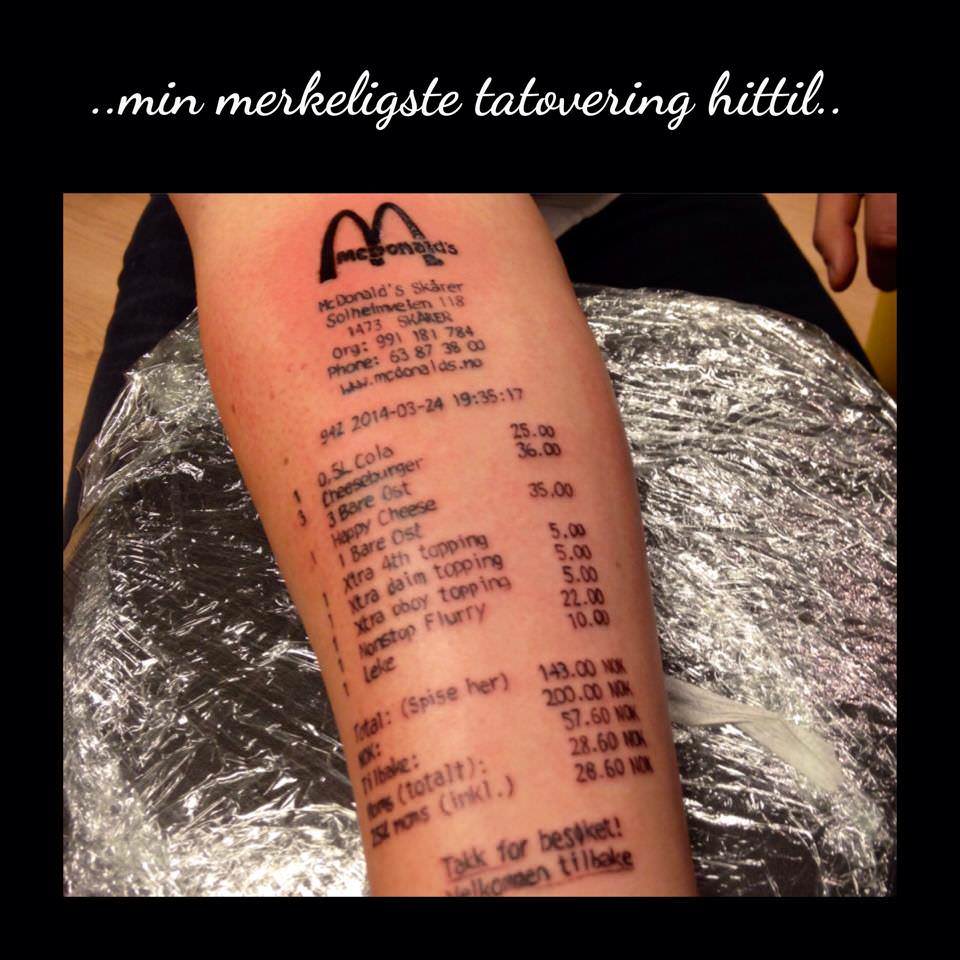 That is a photo I found on Sabelinks Facebook page that I linked to above of the actual tattoo. The fans had lots to say about this and I’m not surprised.

So that left me to wonder if other businesses out there would follow suit with this idea and start paying humans to do permanent tattoo advertising for them if they paid the cost of the tattoo.

I’m sure there are loads of people out there that would love to get a free tattoo and support the tattoo advertising movement. If there was some other perks involved even better or a small cash payment.

I could see this is being one of the best forms of advertising especially for those who live in warm climates and don’t have to bundle up and hide tattoos in the winter.

I mean, why not get in there and pay off some debt or get a free tattoo if they offer you cash or opportunity. I know I’m being a bit sarcastic here but the reality is there are people who will take this seriously. So if you are in the market for a free tattoo you might just get your wish but just not your choice of tattoo.

Would you consider free tattoo images with perks advertising a business on your body? 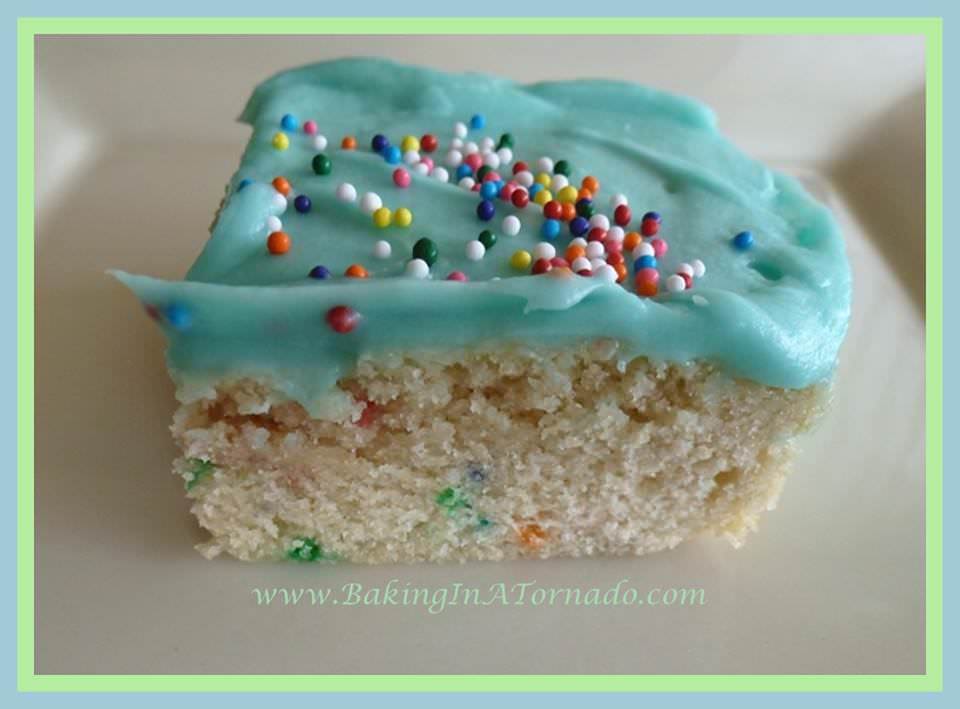 This week that recipe goes to a food blog called “Baking In A Tornado” with their Confetti Cookie Bars. When I saw it this morning I actually wished I had a big slice with my cuppa tea.

Well, that’s a wrap for this PF Friday’s Grab a brew #65. Happy budgeting and I’ll see you here again next week when I do it all over again. 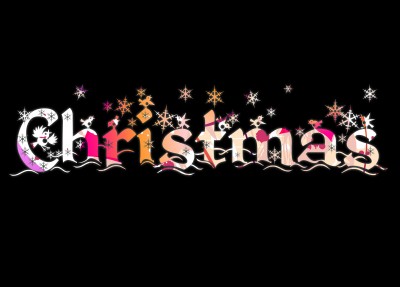 HOME IS WHERE THE HEART IS   After Sunday I’m officially on holidays which means we’re going home to see our friends and family to celebrate Christmas and New Years for the next 2 weeks. Christmas is one of those times of years that our families can actually all get together in one room and… 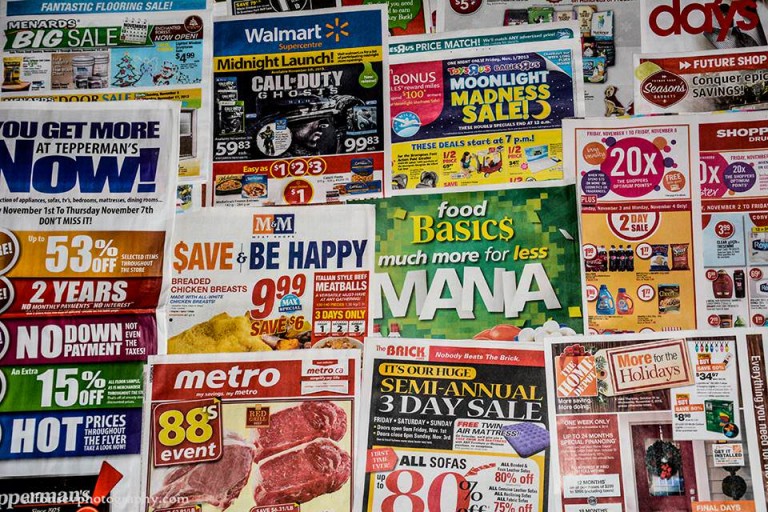 HOLIDAY SALES START NOW… ARE YOU READY?   Time to ring in the holidays with flyers, flyers and more flyers. Are you ready Canada? A better question might be, Is your budget ready? Boredom for many people can lead to spending more money than they need to, but we should be able to control these… 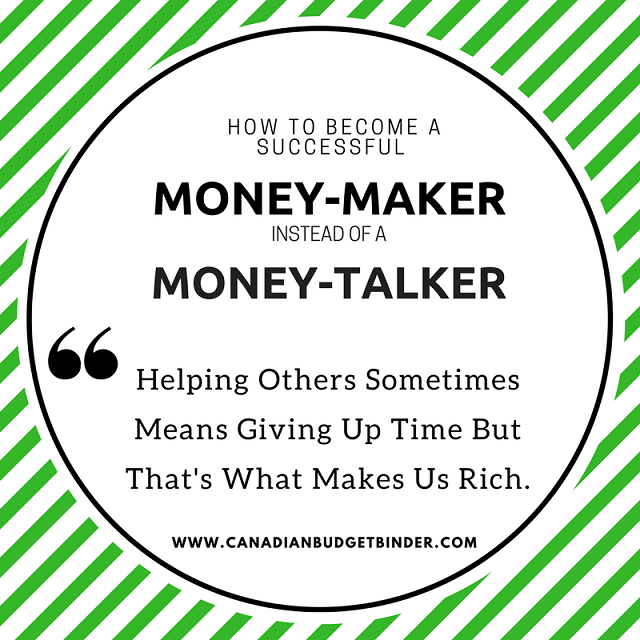 THERE ARE WAYS TO BECOME SUCCESSFUL AND IT STARTS WITH BELIEVING IN YOURSELF OTHERWISE YOU’RE JUST WASTING YOUR TIME.   Honestly, I don’t think I’ve ever been a money-talker because I’ve had the money-maker motivation from a young age. If I talk about money these days it’s on this personal finance blog sharing our successes… 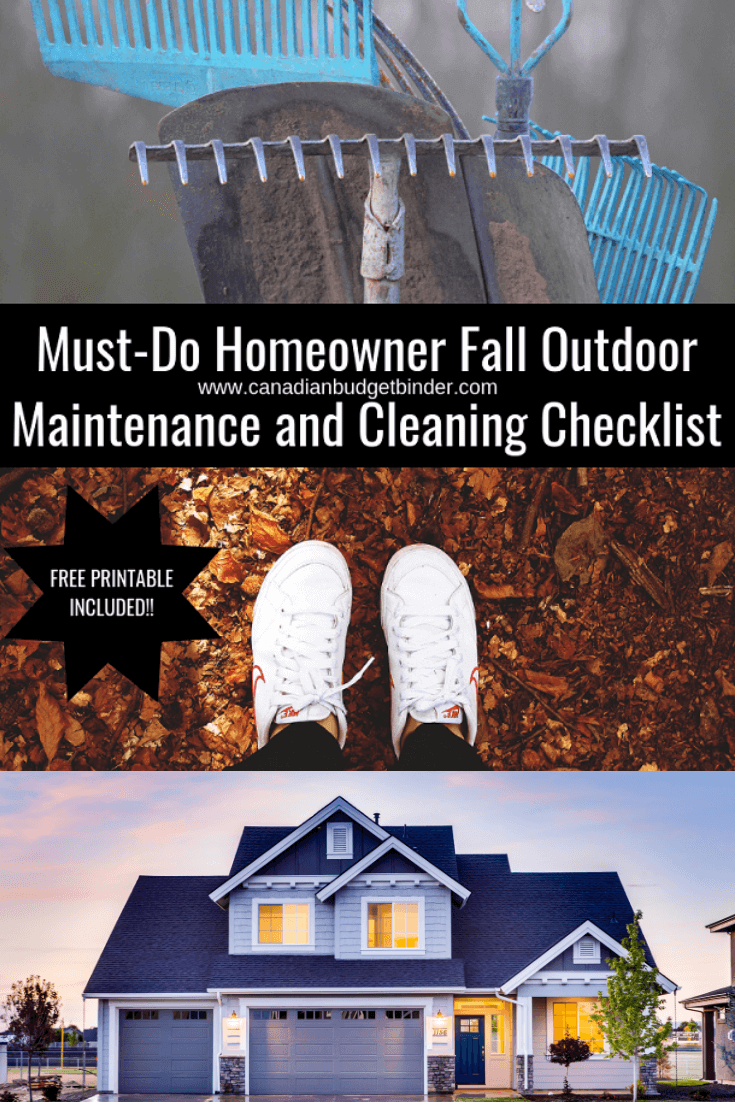 We’re beginning the last few months of the year, and it’s time to go outdoors to start a Fall home maintenance checklist. You won’t do the chores in one day, so the Fall Home Maintenance Checklist is handy for me. With the cooler weather being outside doesn’t bother me as the high humidity does, so…

Mr.CBB’s Week in Review This week seemed to fly by so fast that I hardly had a moment to enjoy it. I’ve slacked in certain areas of my life simply as there hasn’t been enough time this week. I’m hoping in the upcoming weeks to be back to somewhat of a normal routine. I’m sure… 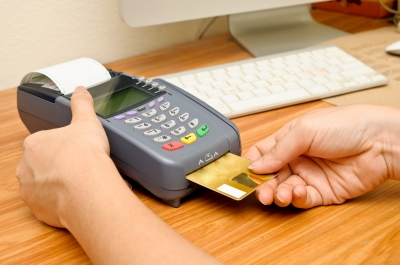 THE SCIENCE OF GETTING RICH   I’m sure you are scratching your head wondering how there could be such a science but to some who want to become rich with money it is a science. Why? They fail to see the long-term effects of putting in effort even if only short-term goals that will help…