You are here: Home / Canadian Law / Estate Planning Canada / Your Last Will And The Legal Ramifications Of Death 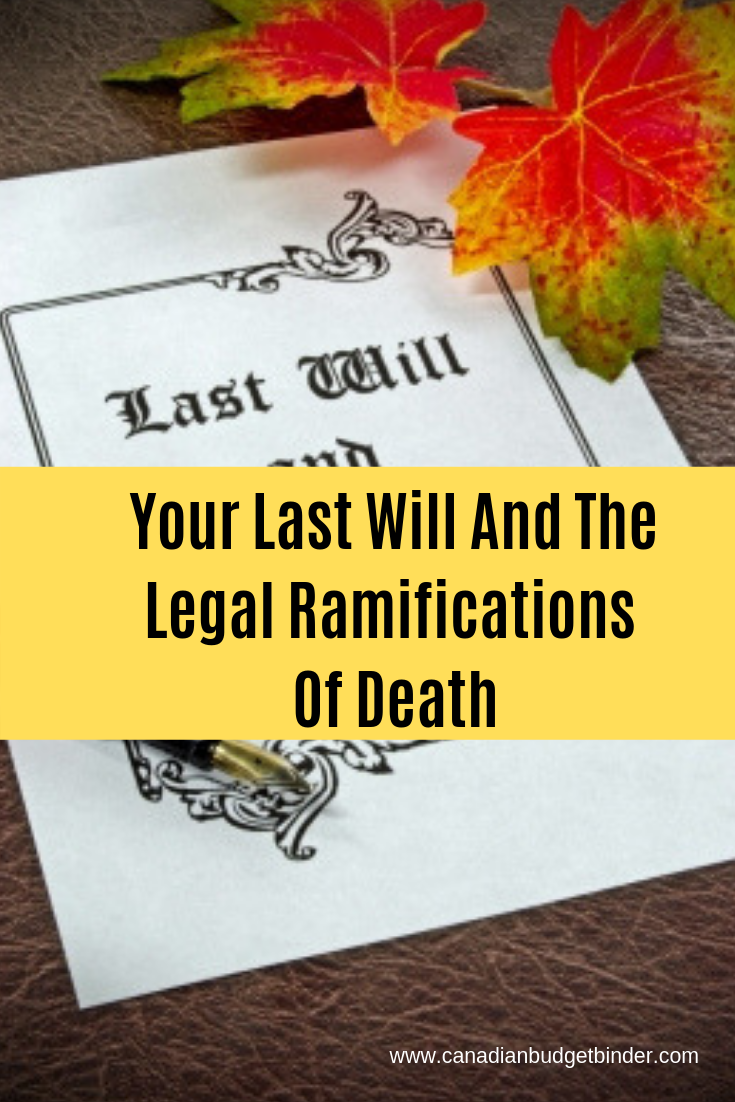 HOW DEATH CAN AFFECT YOU AS AN EXECUTOR OF THE WILL

When a loved one dies, the grief of death that follows is often overwhelming and difficult to bear.

I know this feeling all too well as my stepfather passed away in 2013 after a COPD diagnosis and several recurrences of cancer.

If you’re a surviving spouse or a very close relative, the responsibility may fall on you to oversee the funeral arrangements and burial or cremation rites.

During this time of mourning, it isn’t likely to be a forethought whether or not the deceased had a last will, significant assets or debts.

Settling an estate cannot be delayed for long however.

Regardless of whether the deceased lived alone or had a surviving spouse, someone will need to assume the great task of sorting through the person’s financial life and personal belongings.

This is in order to meet the law’s requirements on the settling of an estate.

Related: How to avoid a Frozen Bank Account After Your Spouse Passes Away

Last Will and Testament

Upon the death of the individual, one of the first questions that needs to be asked is if the deceased had a valid last will and testament.

In Canada, there are commonly three types of wills used.

This is a typed document that outlines one’s wishes that must be signed by the person in the presence of at least two witnesses.

Formal wills are usually drafted by a lawyer as they are familiar with the proper wording and can ensure that all issues are addressed.

Similar to a formal will, a notarial will is solely used in the province of Quebec.

The document is prepared by a notary and signed before the notary in the presence of a minimum of one witness.

This is a handwritten document, signed by the person with no witness required and a holographic will must be probated by a court or a notary if done in Quebec.

This option is potentially the most problematic because holographic wills can be lost, damaged or destroyed.

They are often subject to misinterpretation and can be more easily challenged in court.

Check with your provincial government as some provinces do not recognize a holographic will as a legal document.

A cheaper option is using a Do It Yourself Will Kit which uses a software program to generate pre-printed forms.

It’s up to you to review the legal terminology that is pre-written with this option.

If a last will is not worded correctly, it can render some of the provisions invalid according to the law.

My Experience In Executing A Will

In my situation, my stepfather had listed me in his last will to serve as the executrix of his succession.

A succession is the term used for an estate in Quebec.

He had also named his brother as an alternate executor in the event I predeceased him or if I chose to not accept the role.

My role as the executrix was time-consuming and complex.

It took several months to complete everything required of me, mainly due to processing times of the government.

There were several issues to handle when it came to properly liquidating my stepfather’s estate.

For those who don’t have the time, desire or inclination to handle the details, you can hire an estate planning firm to serve as the administrator.

For a fee, the administrator can help the executor/executrix to navigate all government requirements, especially for large and/or complex estates.

I initially consulted with the family notary and accountant to clarify a couple of points but I felt confident enough to handle the responsibility mainly on my own.

Responsibilities As Excutor of the Will After Death

The following is a summary of the key responsibilities that I fulfilled in the role of executor for my stepfather’s estate.

Related: The Ultimate Guide For Planning Ahead Your Death

Dying intestate (Without A Will)

This means that the provincial government will be the one to decide how the deceased’s assets will be divided.

Every province has their own rules to define who can benefit from the estate and by how much.

This decision can force the estate into litigation and result in a loss of money for the eventual inheritors.

Because the government cannot possibly know the true wishes of a deceased, you are strongly encouraged to make a legal will to ensure that your intentions are honoured.

Resolving Debts After Death In A Last Will

Have you ever wondered what happens when a loved one dies and you learn after the fact that they had debts?

Well it happens more often than you’d think. Besides the emotional disturbance you feel when learning that the person had financial secrets, you may worry that creditors can pursue you for repayment.

In short, nothing will happen to you directly as long as you are not contractually obligated towards their debt.

In other words, once you have never signed your name to a debt, you cannot be held liable to pay someone else’s debt – even that of a deceased spouse!

If you are ever contacted by a creditor to repay a debt you are certain you do not owe, ask them to provide you with a copy of the contract with your signature.

For a creditor to successfully collect on a debt, the estate of the deceased must have assets.

The assets will be liquidated in order to pay any creditor that has legally proven that the debt belonged to the deceased.

A payment to a creditor must be done prior to the distribution of any remaining assets to the beneficiaries.

Once it’s proven that the estate has no money, the creditor will have no other alternative but to write off the debt.

It is always wise to consult a legal professional before making any decisions concerning the debts of a deceased.

A Final Word Enacting A Last Will Upon Death

Please consider that this article was written for general information purposes and in part based on my personal experience.

With time, the law and government procedures relating to the event of a death may change.

For more information on wills, consult with a lawyer or a notary if you reside in Quebec.

The provincial and/or federal government website may offer a free guide of what to do in the event of a death.

As well, many Canadian banks and credit unions offer fee based trust and estate planning services along with free will planning guides that can be downloaded from their websites.

For detailed information on a federal clearance certificate, visit the CRA website. Residents of Quebec can consult the Revenu Quebec website.

Kassandra Dasent is a self-employed wife and step-mom striving to live life beyond what money can buy.

In addition to working as a freelance writer and business consultant, Kassandra blogs at More Than Just Money about a variety of topics and personal experiences that all intersect with money.