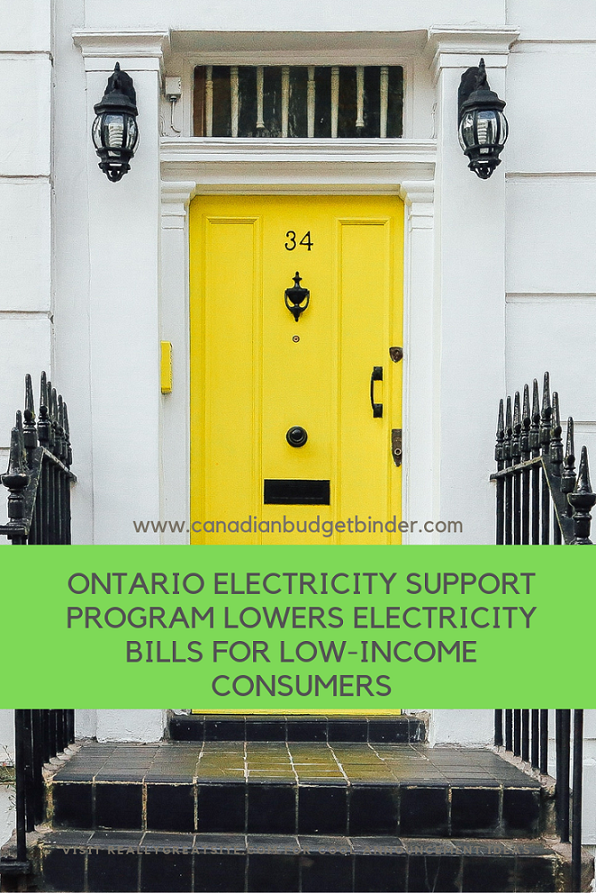 Ontario Hydro Rates have undoubtedly has only seen increases for electricity bills but what we learned was that there is an electricity discount for low-income consumers.

The Ontario Electricity Support Program (OESP) is a program that helps those with a lower-income in Ontario with lowered electricity bills. The OESP program started in January 2016 and if approved you get a direct credit on your Hydro bill on an on-going monthly basis.

This program which is funded by the Provincial tax base since March 2017 is part of the Ontario Fair Hydro Plan to help lower-income consumers.

Imagine your electricity bills dropping from hundreds of dollars each month to just under $100 for one person. Well, it happened to my mother-in-law as I share her story today in hopes of helping others with a low-income who could benefit from this program.

Who would have thought you could actually apply to get an electricity rebate in Ontario?

Perhaps you’re reading this today and don’t qualify for the OESP but there might be someone you love who does.

This is my in-laws story and our experience dealing with the OESP application.

Honestly, since we take care of my in-laws finances now it’s hard to look back and see how many thousands of dollars was spent on their electricity bills that we could have had reduced with an OESP electricity rebate.

It’s heartbreaking because now we see my mother-in-law struggling with the little money she gets and she doesn’t even know it.

Eventually she will have to sell her house and move into something smaller, rent or potentially she may end up in a long-term care facility since her health will only decline.

The summer months were even more costly and at times my wife would cringe when her mother would tell her how much her electricity bill was.

There were times we’d try to compare our electricity bills and although there were usage differences we couldn’t compare as it just seemed outrageous for two people who didn’t work and were so ill.

My father-in-law who suffered from severe heart disease and had many heart attacks over the years needed the air-conditioner on all summer.

I did find out that there would have been a rebate for him had he bought a new air conditioner however he’s gone now so that was a missed opportunity for them.

Perhaps a newer mode central air conditioning unit would have been far more efficient than the ancient one that sits dead at the back of the house.

You could walk in the house in the summer and feel like you were in a freezer which felt good for a bit until your teeth started to clatter. Nothing a jacket, sweater or heavy blanket couldn’t solve though.

Their house a bungalow is fairly large at just over 2000 sq feet so you could imagine what the electricity bill was like.

He also ran heaters in his mini green house to heat it up over the winter not to mention having the heat very high indoors.

It was like a sauna when we would sleep over but it was nothing in comparison to knowing you will likely die of a heart attack. We dealt with it and opened a window in our guest room while the door was shut to invite cool air in.

All we could do in order not to melt during the Fall and throws of winter when we’d visit was take it in stride and understand the circumstances.

He was so worried about his health that eating organic was a must especially if he could grow it himself. He swore by medicinal herbs and would drink fresh fennel greens tea to ease the pain in his stomach from all the pills he had to take.

He was a brilliant man whose life came to an end far too early.

The Hydro bill was not paid by my father-in-law and although he knew how expensive it was he just thought that was the price he has to pay in Ontario and that everyone else was doing the same.

In theory yes everyone who uses Hydro in Ontario and pays the bills gets billed for what they use but he wasn’t understanding the amount he was using was far more than a normal couple would.

To him paying bills was a part of life and he believed that what he was told to pay was what he paid. This was the old-school way of living I suppose, I’m not sure.

The biggest hydro bill expenses always came from the heat and air conditioning because without it he struggled to breath as fluid filled his lungs.

Keep in mind that water and hydro are combined our their Ontario Hydro bill the excess water usage over the summer months watering their flowers and vegetable garden also hit the electricity bills hard.

His basement also housed many freezers that he’d collected over the years and they put to use stockpiling food. It really looked as if it was an obsession by the end of it all because we had to donate so much that two of them would never eat.

I guess food was love and all they could offer to guests and the kids when they came over so they made sure they always had enough.

You’d never go home empty-handed. What they didn’t know was that those old freezers were costing them a fortune on their electricity bill.

Through research my wife found out about the OESP only because she was struggling to balance a monthly budget for her mother.

Her mother who currently lives on a survivors pension and her early CPP just wasn’t enough to cover such high bills.

Everything happened fast so it’s not a matter of sell the house and move somewhere smaller it was a matter of finding out what was costing her so much on her electricity bills.

Are you eligible for the Ontario Electricity Support Program?

To apply for the OESP you must be the Hydro account holder and reside at the address you are applying for an OESP rebate.

Whether you qualify for the OESP depends on your after tax income and how many people live in the household.

Try this OESP self-assessment to see if you will qualify.

1. How many people currently live in your house?

2. What is your total annual household income after taxes? (Please do not include commas in your response)

The good news was that there was no official time-frame for applying to possibly receive an OESP electricity rebate so we did it right away for my mother-in-law.

Since we don’t live in the same city as her and we had power of attorney we were able with assistance from the OESP intake agency staff to fill out the application and send it in online.

There are 173 intake agencies available around Ontario to help people with their application at no cost by calling the OESP contact centre. (number at the end of post)

You will need your after tax income amount which you can find on your income tax assessment on line 236. Your household income will be verified through your Social Insurance Number and your income tax returns with the government.

To find out what your after tax income is for the purposes of OESP eligibility, multiply your net income (line 236 on your Notice of Assessment) by 87.82%.

You will also need the following to apply for the OESP

If you pay for your electricity bill online you can simply log into your account to find the information on the bill that you need.

No one will come to you about your Hydro Bill so if you want to get in on the program and are eligible then you must apply online at OntarioElectricitySupport.ca

We did the full application online.

You can also mail your application to the Ontario Contact centre by request. Give them a call if you need to go this route.

Once approved you must re-apply every two years unless you are 65 years or older or collecting CPP-Disability and it is every 5 years as part of the extended eligibility program. If your financial status improves or changes you must also let them know as well if you move.

How much will my OESP credit be?

The OESP on-bill credit amount will depend on how many people live in the house and the combined household income after tax.

There is also a higher level of assistance program for those who qualify because they may have health related medical equipment at home. To qualify for the higher level you must use one or more of the following;

How to save money on hydro bill Ontario

Some of the ways we helped my mother-in-law cut the costs to her electricity bills besides applying for the OESP were at best simple and overwhelming.

All of the above was contributing to electricity bills that were way over the top for their low-income status.

Whether you qualify for OESP or not remember that everything you do at home with your electricity and water will cost you big bucks. It’s important to do an electricity audit to see what’s costing you money and where you can lower your utility bills.

After seeing what my MIL has changed since my FIL was alive and the massive change in her electricity bill really was an eye-opener for us when it comes to electricity usage and costs.

If you were like us and not sure about how to go about applying for the OESP due to health reasons of the homeowner or you have other questions about the program I urge you to call.

It’s a simple phone call that can change how much money you pay for your electricity bills each month if you qualify.

Not too many people are aware of the OESP program like my in-laws which meant they would have had far more money saved up for times in need as my mother-in-law is in now.

If you have questions about the program, you can contact the OESP Contact Centre in the following ways:

Discussion: Do you struggle to pay your Hydro bill in Ontario? How much do you pay monthly? Leave me a comment below as I love to hear your feedback.