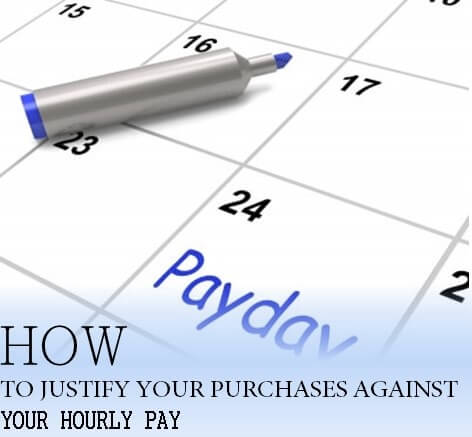 SAVE  MONEY IN A WAY THAT WORKS FOR YOU

Should you use your hourly wage as the deal breaker for potential purchases?

Every so often I meet people who have something to say about finance and it just so happens that I find these people like magnets.

First thing to remember is that what you earn is not what you net.

In other words if you make minimum wage you aren’t taking home $15/hr after various taxes.

Same goes to those who earn a salary, you’re in the same boat. This is common knowledge though right?

If so why are so many people in debt?

Whatever you net is the money you get to play with in your budget. It’s amazing how many people forget about using the concept “Spend less than you earn” even though it’s fairly straight-forward.

While we were doing some shopping in Burlington last week I was feathering through the CD’s which were on sale for 50% off. It was an amazing deal for new release CD’s and other CD’s that I normally wouldn’t pay full-price for.

It was pretty busy so space was limited and we were all elbow to elbow trying to snag a deal.

Whenever I am out I have a habit of talking to strangers (if I don’t know you, then you’re a stranger) so I started chatting to the man (for the sake of this post I’ll call him Mr.CD) next to me who was singing to himself quietly about whether he’d come across certain CD’s that I wanted.

After a second I thought maybe I shouldn’t disturb him as he seems to be in his own element but then I thought, nah.

Mr.CD was ballpark about 200 CD’s ahead of me so anyone who values their time like I do wouldn’t think twice about asking if he’d seen a specific CD that I was looking for.

Oddly enough he hooked me up and found us 4 CD’s that we wouldn’t mind buying for under $5.

I thought he was pretty brilliant remembering exactly where he had seen the CD’s or the general location.

Too bad they were closing down we joked, he’d be great for customer service.

Since we were already chatting I brought up how interesting it was to see so many people coming to the Target inventory sell-off.

He says he wasn’t that shocked because most Canadians can’t afford to pay full-price for anything in the stores these days. He’d been coming in and out weekly trying to score some deals for his apartment.

At this point my budgeting radar goes off and I’m listening to Mr.CD talk even though he had no idea that I was REALLY interested in what he had to say.

Although there were crowds of children and parents behind us tearing apart the toy section I was all ears and focused on Mr.CD. I’m always ready to talk money (as long as it’s not my money) so I asked him some random questions, trying not to sound too nosey.

I thought I might as well pick his brain to see what he has to say about shopping and spending money.

Don’t get me wrong I love to chat but he REALLY wanted to chat.

Maybe he was lonely and I was just a sucker for a good money conversation. Good thing our son was sleeping and the wife was off doing her own thing.

Hourly Wage IS a BIG Deal

So to keep the conversation flowing I asked him if he lived in Burlington (you know boring stuff like talking about the weather).

He glanced at our son and said he was a quiet baby (he was sleeping, so ya, lol).

Do you work in the area then, I asked? Yes he said just over at Walmart.

Oh, I said and you’re shopping at Target trying to score some deals. He said that he could never get these deals at Walmart, so why not try to save some money.

He then said that if he did find something good he’d have to really think about the purchase since he had limited funds. (Not something I would tell a stranger but hey, I’m not like everyone)

What do you mean, I said to Mr.CD?  Here’s where the “I could use a cuppa tea, begins.”

(I’m going to share his story as I remember it and my thoughts in between.)

Two years ago Mr.CD was working for a very big company earning a decent salary but he was laid off 2 months into the role.

“I went from having my dream job fresh out of University then having to sign up for welfare because I had no savings or income.”

Ouch. (yes that’s me saying that)

He never thought much about the money he was earning and would spend roughly $500 a month on anything he wanted.

The rest of his income went to paying other bills.

It was a shock for Mr.CD to realize that his “fun money” accounted for about $5000 in yearly expenses that he could have saved. The little things really do all add up, I said to Mr.CD.

Mr.CD didn’t have enough hours with his employer to collect Employment Insurance which is why welfare was his only option. He said it was embarrassing to have to deal with the situation as he’d always had money and enjoyed living a good life.

He never thought he would be entered into a system that so many people look down on. “Whatever people want to think is fine with me but inside of me it really hit me hard.”

University was paid by working every summer and his new career boosted his motivation to save more but he always managed to spend it. So in the blink of an eye he went from University to a career with a salary to welfare then to a minimum wage job.

Having hardly any money after paying for rent and any other bills he said it was tight financially. Why didn’t he have an emergency savings, I thought?

He then turned to me, looked me in the eyes and said, “I will NEVER be put in a  position again where I can’t look after myself for at least a year without help.”

Then his eyes drifted back to scanning through the CD’s.

I think we hit a sweet spot but I could tell he was in a happier place since he was smiling.

I also thought that was widely impressive and I wanted to know how he was saving the money.

So Mr.CD how do you go about saving your money and building your emergency savings fund now?

I only buy things if I can justify the expense in comparison to my hourly wage. Customer service and all my other duties is hard work so if I’m spending my small income on something you better believe I’m going to make sure it’s worth it.

What he does is he visually thinks about how hard he has to work to pay for something.

Even though he makes minimum wage at Walmart he’s not seeing all that money, he said.

By the time he pays for his rent, small investments, vehicle and food he doesn’t have much money sitting around.

What he does have goes into his emergency savings fund which is now at $5000. I’m guessing it’s been a good year of saving for him.

Good for you, I said. How were you able to save so much in such a short time?

He told me he put to work his concept of only making purchases based on his net hourly wage. That means whatever his gross hourly wage is minus taxes etc.

Not much money, if you think about it from that perspective.

Mr.CD went on to say that he does 3 things to help him save money as he dropped a CD on the floor, oops.

A few people had turned their heads to get a glimpse of all the noise in our corner.

I’m just going to paraphrase what he said.

Here’s an example I put together so I would understand and maybe you can as well.

For example, if he was to buy a bag of fresh cherries off-season at the grocery store and it rings in at $14.00 he may decline the purchase. He wouldn’t simply put some back.

The price would be far too high and no amount of money would justify the expense against his hourly wage. It makes more sense to spend less on a fruit in season or on sale.

Not all of what he buys is compared to his net hourly wage but it sure has helped him save $5000 in the last year.

It’s not difficult to do, he says. ( I just nodded knowing that he was right)

All you have to do is know your net hourly wage and if you make a monthly salary find out how much money you net then divide it by the amount of hours you typically work and that is what figure he uses to base his decisions on. (I hope I got all that right, phew)

If his budget runs out of money then he has nothing left to spend. There’s no reason to even go into a store at that point until the next round of income is in my bank account, he said.

He told me that he had about $15 to spend on CD’s in his spending money category so he didn’t want to blow it all today.

Since he didn’t blow all the money now he has some extra cash to carry forward for another month or to use for other expenses. Going from earning hourly to salary and then back to hourly again is hard but doesn’t have to drag you into debt.

He learned the hard way and even though his form of saving may be very ODD to some people, it works for him.

Kudos to him I say.

If it works for you, go for it.

I wasn’t going to ask him if he had any debt but by the sounds of it, he didn’t. He rented an apartment from a family friend and pays $400 a month.

That ultimately doesn’t leave much money for someone earning minimum wage and likely why he justifies his expenses according to his hourly wage.

So at the end of the conversation I asked him what advice he could give to me because I want to start budgeting and spending less money.

He says and I kid you not…

Don’t spend more than you earn.

Honestly, I hope you are a CBB fan but at the same time I thought you were pretty cool to say that to me because you are right.

No matter how you choose to defend making a purchase what it all boils down to is “Can you afford it?” If you have debt it makes more sense to work hard to pay off the debt instead of creating more debt.

You never know who you will bump into and where but what I find interesting is that most of the students or recent grads that I talk to really have a grip on the budgeting these days.

I’m not sure if money and budgets are spoken about more openly these days or if they just “get it” but it’s refreshing to hear a success story like Mr.CD’s story.

Discussion: Do you think about your hourly wage or salary to hourly wage amount before making purchases?