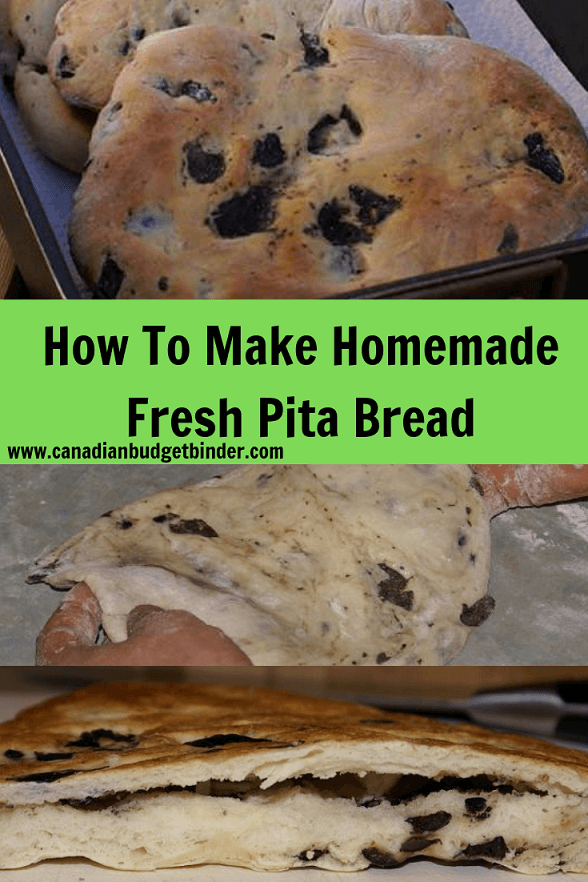 HOMEMADE OLIVE PITA BREAD IS SO CHEWY AND SOFT

Making homemade olive pita bread is easier than you think and it won’t break the grocery budget.

Even if you don’t like olives in your pita bread simply leave them out of this recipe.

You can buy pita bread which is fairly inexpensive but NOTHING beats homemade olive pita bread straight from the oven.

There’s no comparison to store-bought vs making homemade bread of any description.

We’ve been buying pita bread to get away from traditional loaves of bread and it’s much more versatile for us as a couple.

Although we normally buy it we wanted to try and make homemade pita bread to see if it was worth all the hoopla in the kitchen.

It sure was, absolutely worth every penny and the time and effort to make it.

This is now going to be a regular recipe in our home although I may modify the flour for my wife who would want a whole wheat pita.

Switch up the ingredients by adding various olives, sun-dried tomatoes, basil, garlic, ginger, chives, and parsley to your bread.

You can also add any spices you like to this recipe so you enjoy it the way you want it.

Types Of Flour For Pita Bread

I used a white all-purpose flour although you don’t have to stick with white flour as there are other options such as whole wheat flour.

If you can’t have white bread you can make whole wheat pita bread by substituting the white flour however you’ll need to add a bit more liquid.

The other option becoming popular is the gluten-free pita bread recipe which is great for those that are on a GF diet.

I’ll admit that I thought there was no way that this bread would have a pocket but once  it came out of the oven.

I cut the pita bread in half I amazed myself when the pita spit down the centre so easy.

Now had a pita bread pocket that I could stuff full of my favourite meats, cheeses, and vegetables for an amazing lunch or dinner.

The Many Uses For Pita 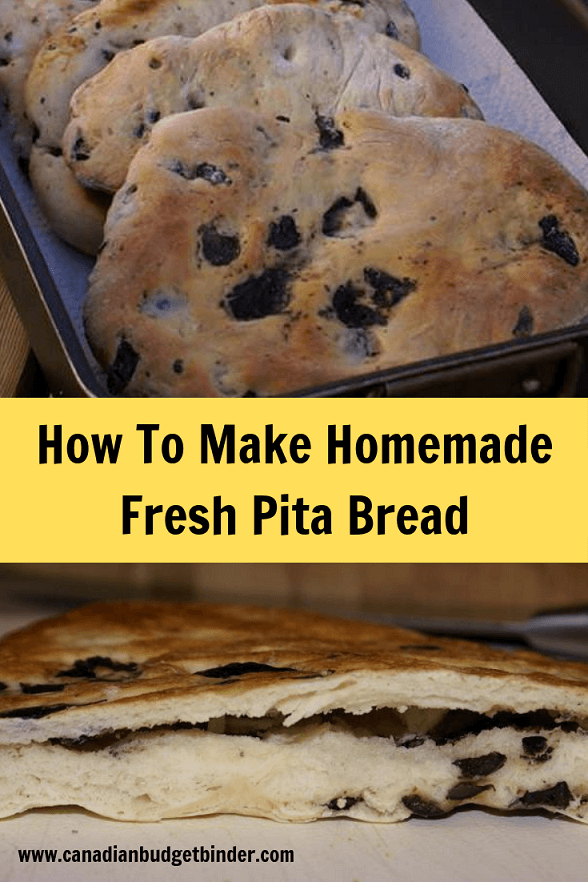 When guests come over to our house its time to break out some healthy appetizers and using pita bread is a great way to lighten the load when it comes to snacks.

We make some of our famous creamy hummus and make the easiest pita chip recipe ever by cutting the bread into triangles, bake them in the oven at 350 flipping them until crisp.

Some people like to call these pita bread chips which essentially they are and we sometimes add a bit of spice on top while they are baking for even more flavours.

There are so many pita bread fillings out there but really you can just stuff one with whatever you like.

We’ve made a pita sandwich with tuna salad, egg salad, veggie pita, meat, and cheese, the list is endless.

Our Greek friends like to dip pita bread in a tzatziki dip with is a yogurt-based dip but it is also a big part of their culture.

In the fast food and food truck industry you will find the use of this bread to wrap gyros, falafel, kabobs, and souvlaki which are some of my favourite fast foods.

One other recipe we make with pita bread is pizza which are dead easy to make and you don’t get doughy crust like you would with a traditional pizza recipe.

I’ve even had toasted pita bread with cream cheese and fresh homemade keto chia seed strawberry jam. To die for!

Where Can I Buy Pita?

You can now find pita all over North American and for most, it is a staple in their home and replaces a traditional loaf of bread.

We typically can buy Middle Eastern Lebanese pita bread or you may find a Greek Pita from Food Basics for around $1.00 for a pack of 6 which is a great price.

I find both have different textures where one is chewy and the other is soft like a flatbread.

They are not near as tasty and the pita freshness and aroma you get making homemade pita bread which you can’t buy in a bag.

I will admit though that $1.00 for a packet of pita for a quick meal or snack is not a bad price but nothing beats homemade not even cheap pita at the shops.

The easy part was making the dough a somewhat round pita bread, the tedious part was cooking the pita one at a time on my hot pizza stone in the oven.

I also call it the pita stone. I’m sure there is some fancy pita bread pan on the market but for now, I will use our Pampered Chef Pizza Stone which the wife has had for over 10 years.

If anyone is worried about the quality of the Pampered Chef Stoneware all I will say is we have many of the items and they all live up to our expectations.

We dream of having an outdoor bread oven that we can toss in pizza, bread and whatever else all at once and have it cooked in mere minutes.

Is It A Healthy Bread? 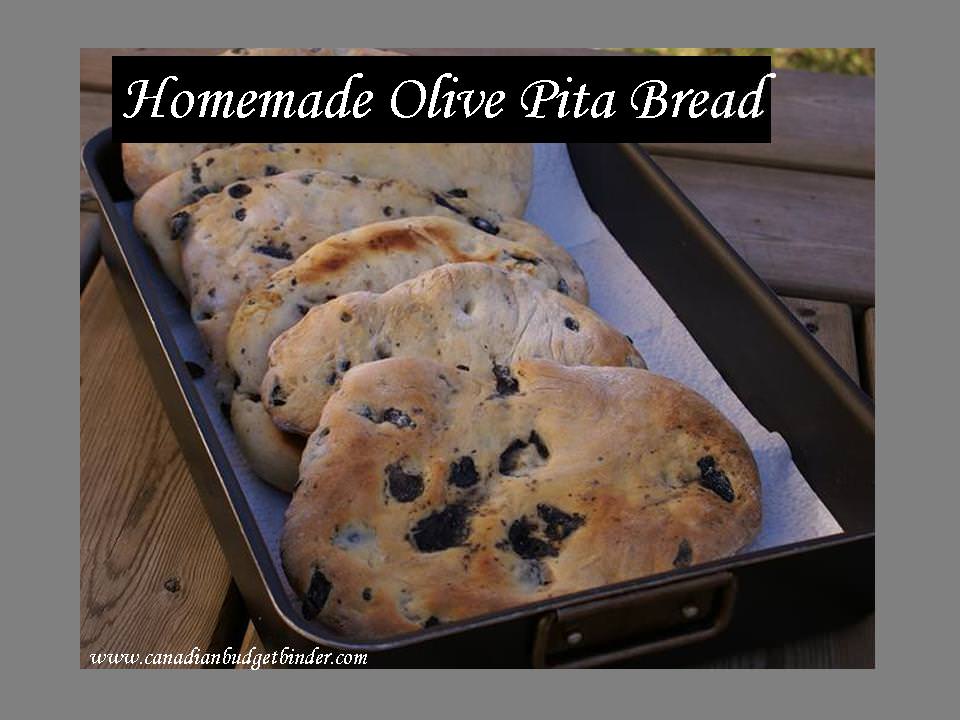 Well, my wife is now on a Low GI (Glycemic Index) diet and her dietician given her a list of foods to choose from often.

Choosing 100% whole grains will be your safest bet with higher fibre and other nutrients than a refined white flour as I used today.

Eating foods in moderation is a smarter way to eat unless you have dietary restrictions or are watching exactly what is going into your diet.

Although pita is low in fat and calories it may be higher in carbs depending on what you choose and what you decide to stuff inside.

The white pita we buy which is a Lebanese Style White Pita Bread called BY BLOS.

The packaging says it’s low in fat and cholesterol-free.

Serving size is 1 pita and that rings in at 180 calories and 1 gram of fat and 0% saturated or trans fats.

The sodium level per pita is 240 mg and it provides 35 grams of carbohydrates, 1g of fibre, 7 grams of protein and 15% iron.

A close relative of ours who has heart disease and has had a heart attack was told by his doctor and dietician to start including whole grain products in his diet including pita bread.

The reason for this was to help lower his cholesterol and to add fibre to aid with constipation as he takes many medications.

Pita will help him to keep his weight down since he is a huge bread lover but should cut back and make healthier choices.

There are not many ingredients in pita bread and for this particular recipe.

I turned to my handy Australian Woman’s Weekly Bread and Scones cookbook.

In the cookbook, I found a fresh pita bread recipe that I adapted to my own liking by adding olives and different measurements.

When I was ready to bake the bread I heated the oven to 400 degrees and put my stone in to get very hot before I put each pita in the oven.

I watched each pita as it cooked and flipped it when the tops got brown because they can burn quickly.

Don’t overcook them as they cook fairly fast at about 5 minutes each side although everyone’s oven temperature may differ.

You cannot leave your oven during the cooking process.

You can find the full printable version for this bread recipe below.

Pita bread is cheap to buy but it's even better to make homemade pita bread because homemade is always better. The crispy outside is chewy with a soft bread texture in the middle. You can keep this recipe a plain pita bread or add various other flavours as you like.
Ingredients
Instructions
Wordpress Recipe Plugin by EasyRecipe
3.5.3251

Enjoy, cover with a tea towel in a baking pan and stuff your Olive Pita Bread with whatever you’d like.

Store your bread in the bread box for up to a week or you can freeze it for up to 6 months.