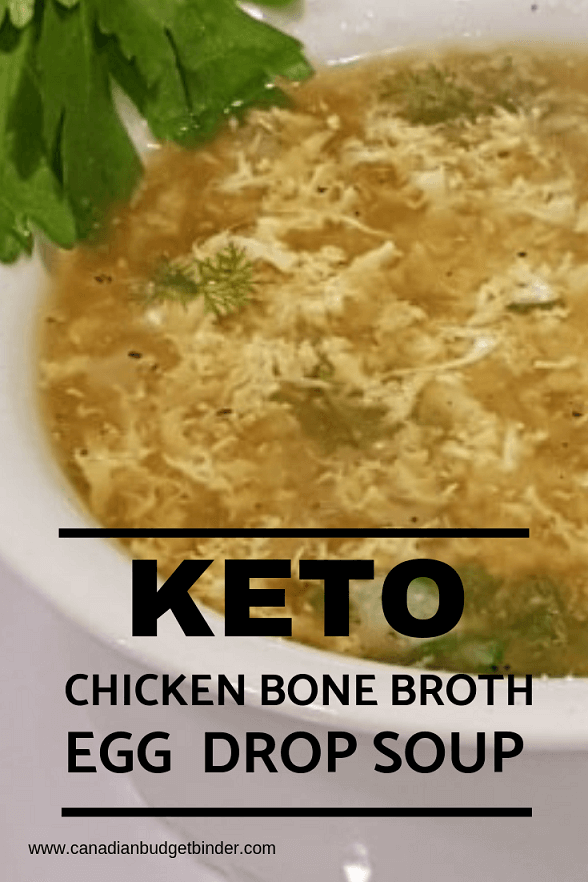 A simple Keto Egg drop soup was what I needed and I made it in under 15 minutes from pot to table.

Also known as an Italian soup called Stracciatella soup it’s probably one of the easiest soups to make.

I hadn’t set out to create a keto egg drop soup recipe until one of my readers mentioned that she was having it for dinner.

Many people tend to see their skin improve as well with all of the benefits from a collagen-rich bone broth. 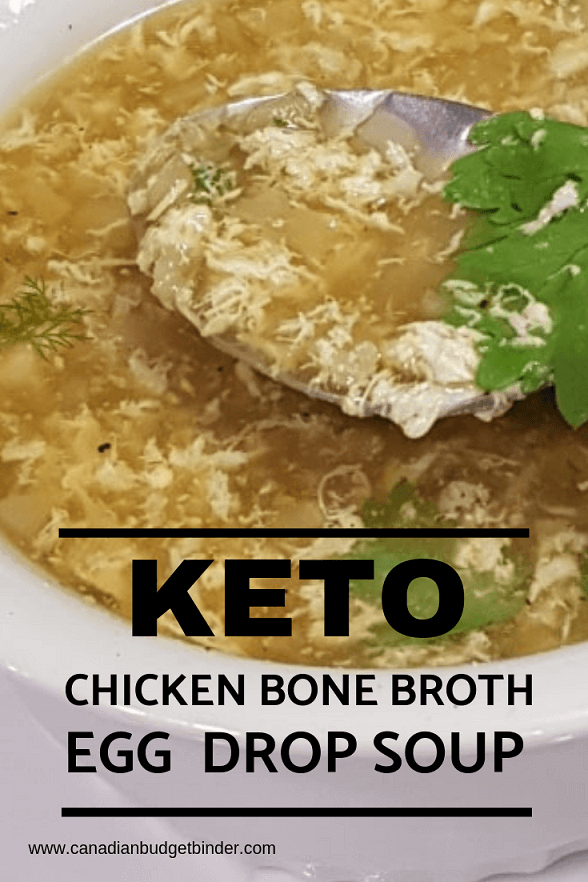 Yes, this soup is keto-friendly because it boasts eggs for protein, chicken bone broth with flavourful herbs.

The addition of fats such as sesame oil or extra virgin olive oil helps increase fat macros for those on a keto diet.

My awesome keto version of the egg drop soup only has 4 net carbs and 75 calories per bowl. 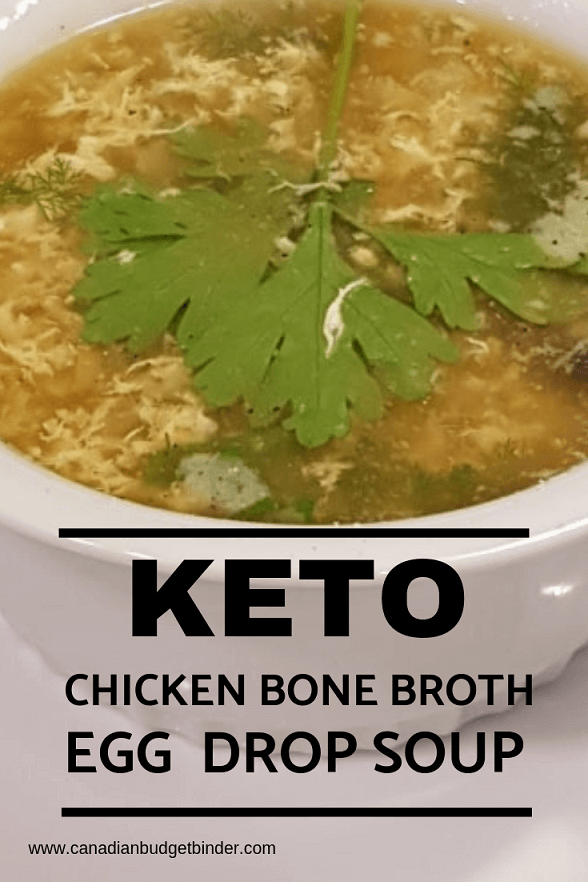 My first question was, “What’s In Egg Drop Soup?” because I really didn’t know apart from eggs and bone broth.

Well, I wasn’t too far off because this is a simple egg drop soup without all the fuss.

What is Egg Drop Soup?

Egg Drop Soup is a Chinese recipe that consists of eggs whisked up in a bowl then streamed and swirled into a hot chicken broth.

The eggs cook up quickly in the soup offering strands of eggs that are so tender and full of flavour in the bone broth.

Many East Asians will add tofu, spring onions and black and white pepper the authentic egg drop soup recipe but they are optional.

How To Thicken Egg Drop Soup 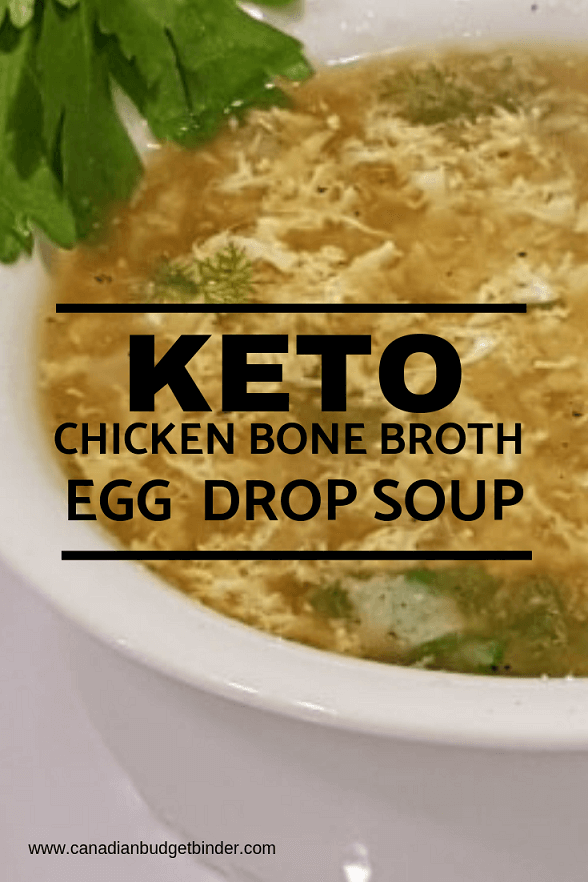 Traditional egg drop soup is made with cornstarch to thicken up the broth but other than that it was perfect for a ketogenic diet.

To thicken this egg drop soup to make it keto-friendly I will use 1 teaspoon of xanthan gum which is the perfect substitute for cornstarch.

We use this variety of xantham gum that we order from Amazon Canada.

Just because I like to be different I tend to add flavours to recipes that aren’t so much what everyone would expect.

I do this because I feel people enjoy variations of recipes that they’ve come to love only when it is introduced to them.

Otherwise, we continue to eat the same recipes over and over again.

If you look outside our backyard window you will see lots of fresh organic herbs such as parsley, dill, basil, mint, rosemary, and chives.

The reason we grow herbs each summer is that we love to add them to almost all of our recipes.

Nothing boosts the flavour of any recipe other than fresh herbs so I’ve included a few handfuls of herbs into my bone broth.

Another ingredient I felt was important to the keto diet for this bone broth egg drop recipe was a touch of apple cider vinegar.

When you pair the apple cider vinegar with the fresh ginger and spring onions, sesame oil magic happens in your bowl.

What To Eat With Egg Drop Soup

You can enjoy a hot bowl of this soup on its own or pair the soup with any of the following keto-friendly recipes.

How To Make Chicken Bone Broth 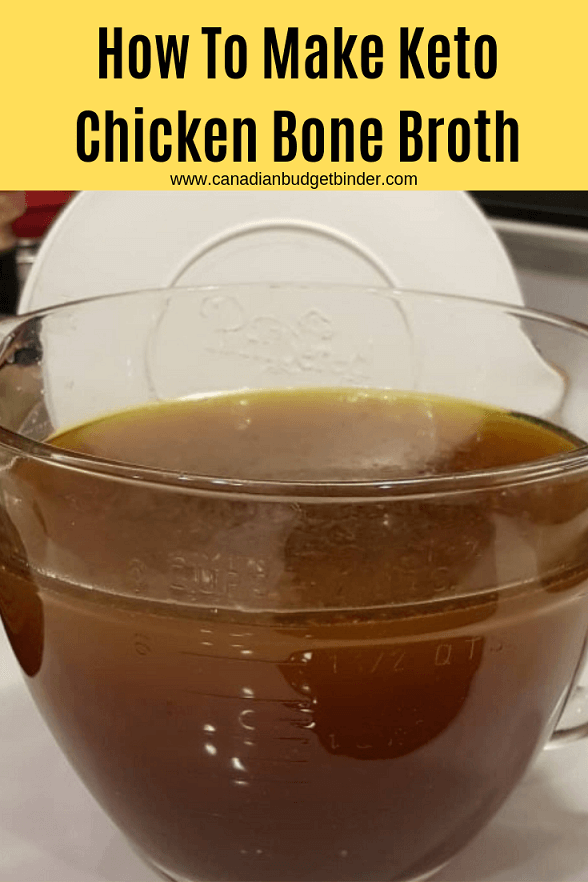 For this particular soup I went with a simple chicken bone broth from Organika as it was quick and easy.

The only downside to buying bone broth is that it can be costly so if you want to save some money making it at home.

A rich Bone broth is loaded with collagen and nutrients and is great for the gut and joint health.

Bone broth is also the perfect bedtime hot drink and helps you get a good night’s rest.

Related: How to make Keto Chicken Bone Broth in the Crockpot or Instant pot 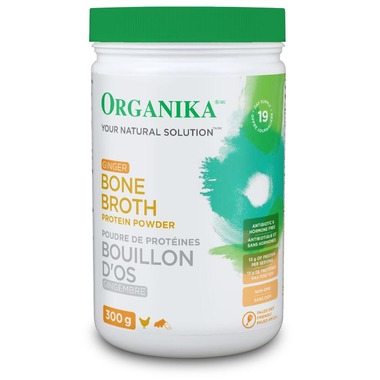 You don’t have to use organic bone broth for it to be Keto as long as you read the ingredient list on the bone broth product you purchase.

We buy our Organika on Amazon as it’s the cheapest I’ve found it anywhere and worth the money in a high-quality bone broth.

Another popular chicken bone broth in the keto community is called Insta Broth which you can also buy on Amazon Canada.

Bone broth is also great to break a fast or extended fast when intermittent fasting on the keto diet.

There are tonnes of pre-made bone broth options in the market to decide which one works best for you if you seek easy recipe prep.

You can use a pot, crock-pot or instant-pot whichever you prefer to make chicken bone broth or even beef bone broth.

For this recipe, we went with Organika only because we had a jar handy and it was a last-minute meal prep idea. 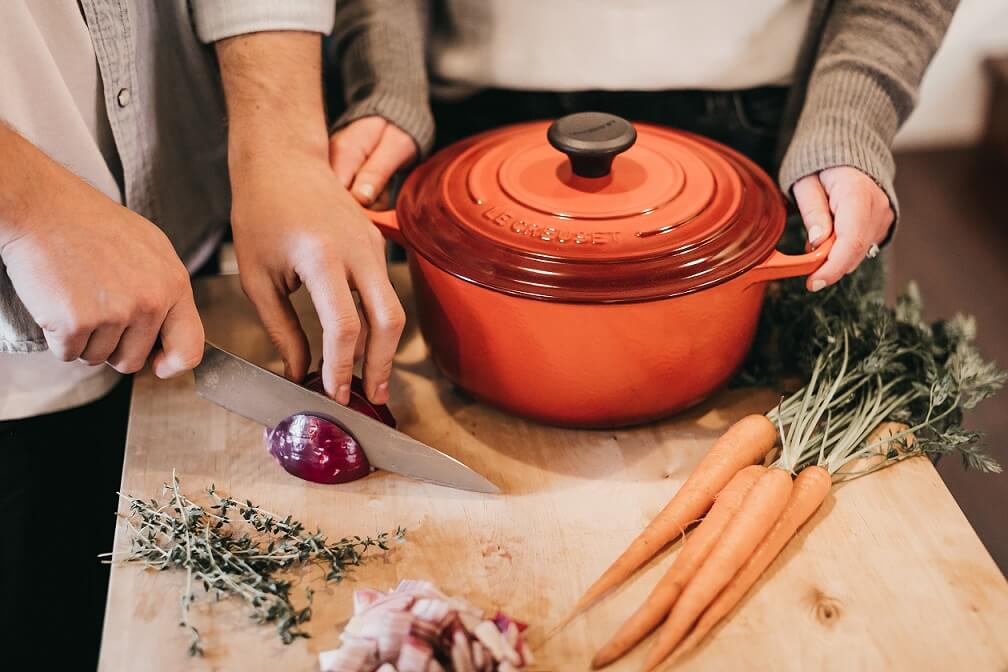 For the chicken bone broth starts with the carcass of a whole chicken in your pot.

If you’re like us and save your veggie scraps in the freezer they are perfect to use in your bone broth and save you money.

Carrots are not on the list of keto vegetables so if it worries you then leave them out and your broth will still be fine.

If you do use carrots you won’t be eating them but the broth will garner the nutrients from them so a few natural sugars.

Honestly, I don’t see it as being a big deal but if you are strict keto you should leave them out.

I like to add about 3-4 cups of vegetables with my chicken bones and then cover with water.

For a boost in flavour, you will want to add fresh garlic and bay leaves and an acidic flavouring.

I like to add at least 1 tablespoon of lemon juice or apple cider vinegar to my bone broth.

Add salt and pepper to your bone broth to which it fits your lifestyle as not everyone likes a salty bone broth.

Cook the bone broth in your;

Once the bone broth is done strain it into prepared jars or containers, refrigerate and it should be a gel-like consistency. 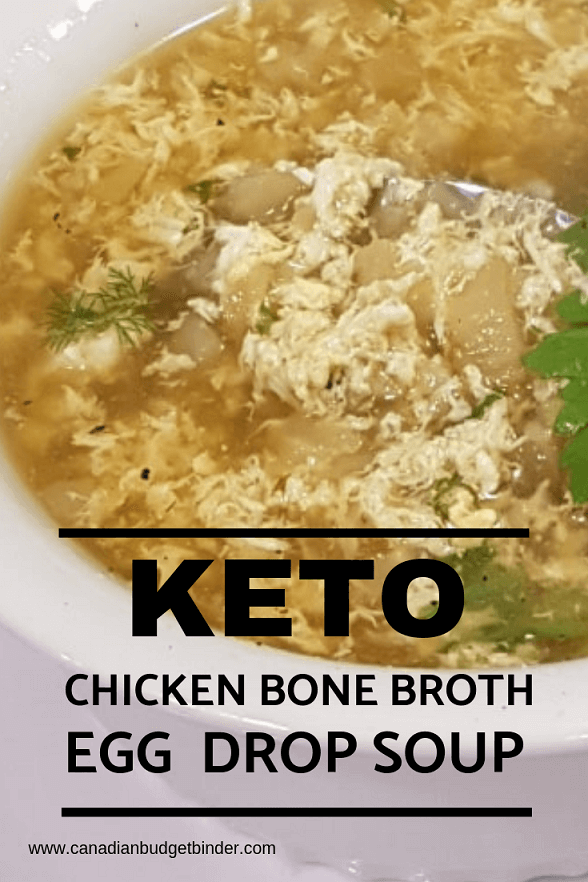 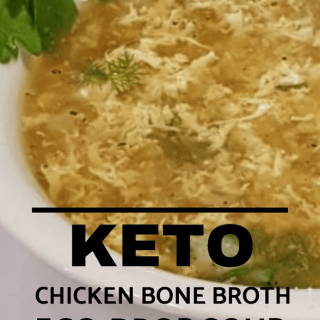 This is an easy Keto-friendly Egg Drop Soup made in a chicken bone broth.
Ingredients
Instructions
Wordpress Recipe Plugin by EasyRecipe
3.5.3251
Discussion: What are some of your favourite kinds of keto soups?  Drop me a comment below.