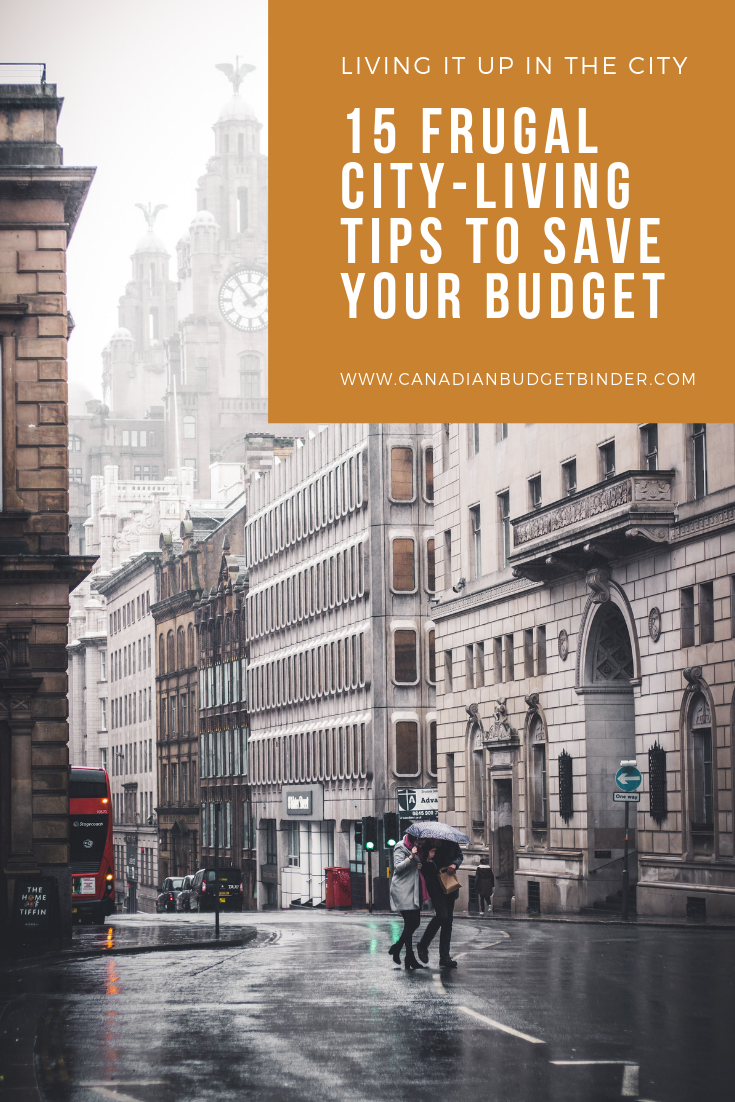 LIVING IT UP ON A BUDGET IN THE CITY

Living in the city isn’t for everyone—it’s hectic, expensive and not the most natural outlet for frugality. Or is it? I’ve found that city-living actually lends itself very well to the frugal life.

There are plenty of ways to extract value and reduce your expenses while living in traditionally high-cost locales.

Mr. Frugalwoods and I have done the city thing. Since graduating from college, we’ve lived in New York City, Washington, DC, and Cambridge, MA (twice).

Why would we, as notorious frugal weirdos, live in some of the most expensive cities in the world? Well, to be honest, because we wanted to.

We were both raised primarily in the mid-western United States and had romanticized visions of the chic, cutting-edge, cultured cities of the fabled east coast.

We wanted to prove we could make it, that we could succeed in these notoriously competitive job markets, and that we could maintain our frugal wits in these havens of lifestyle inflation. And we have.

The past 8 years have been an incredible experience for us. It has also been instrumental in teaching us what we really want out of life, which, as it turns out, is the exact opposite of what these cities offer.

Our plan now is to retire to a homestead in the woods at age 33, quit our jobs, and leave the trappings of our urban environs behind.

I can honestly say that there’s no way I could have come to this realization without first living city life to the fullest.

While these locales boast a notoriously high cost of living, we found ways to not only frugalize urban life, but to mold it to our money-saving advantage.

While in Washington, DC and Cambridge, Mr. Frugalwoods and I finagled our urban environments to our advantage and found that city living facilitated our 65%-85% savings rate. 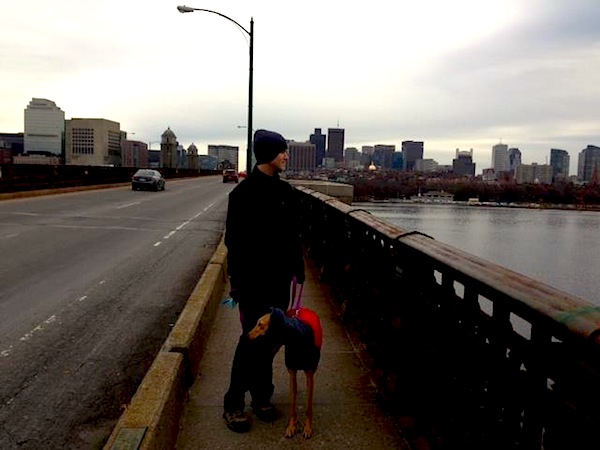 While we’re seeking to escape the high-stress rat race for the long-term, city-living has actually promoted our frugality.

Just about anything can be done frugally, as Mr. Frugalwoods and I are always out to prove.

This isn’t exactly a tenet of frugal city living, but it is a gigantic component of how we’ve made it work.

Our higher city salaries enabled us to buy a single-family house in the middle of Cambridge, MA, which is nearly unheard of for people our age (we were 28 at the time).

How did we do it? We kept all of our expenses, other than housing, as low as humanly possible.

Housing is somewhat out of your control in the city (though there are more and less expensive options) and so we focused our efforts on every other part of our budgets.

That’s what we do to this day, and when I share our expenses every month, it’s rather eye-opening that our mortgage is quite a bit more than all of our other expenses combined.

Additionally, Mr. Frugalwoods and I (pre-Frugal Hound!) lived in a relatively dank, sunless basement apartment for the first three years of our marriage and socked away money.

We had our frugal sights set on buying real estate in Cambridge and knew we’d need a hefty down-payment in order to receive financing for a mortgage.

Since we bought this house with the intention of turning it into a rental property, which we’ll do once we’re on the homestead, we’ve been very pleased with the increases in rental prices in the city.

Our total cost for transportation for city-living is pretty darn cheap compared to others who run a car 100% of the time.

Unless you’re doing something truly funky with your commute, city living yields low transit costs. Principally, we don’t drive much.

Our intrepid 18-year-old minivan, the Frugalwoods-mobile, only gets driven about 5,000 miles a year.

We typically spend about $45 per month on gas. Not bad. We reply on walking, public transit, and biking for the majority of our transit needs.

And when we do drive, it’s usually a short distance.

In addition to the power of commuting via your legs, cities are fabulous places to simply stroll.

We take walks with Frugal Hound almost daily and it always provides an interesting perspective.

The sheer size of people living in every square block makes for some entertaining action and we love checking out what’s happening in our ‘hood.

Plus, it’s great exercise–the city is the original gym (in my opinion anyway).

Yep, that’s right, all those sirens that wake city-living denizens up in the middle of the night are completely free of charge!

No need to pay for music when you can have the city’s natural soundtrack serenade you when you least expect it and without cost.

There’s basically no reason to ever pay for entertainment when you live in the city. Mr. Frugalwoods and I have a $0 entertainment budget and never feel deprived.

Between events at our incredible public library, street fairs, free days at museums, festivals, and just the generally fascinating things you see on walks (see #3) we’re covered. Experiencing a culturally robust life without spending a dime is a prime benefit of city living.

The multitude of grocery stores in a 5 mile radius of our home is staggering.

Since they’re all in easy walking distance, we can comparison shop, buy produce in small quantities (to cut food waste), and sniff out the best deals. Of course we were once mistaken for through-hikers at the grocery store, but we wear that as a badge of frugal honor.

In addition to the wonders of multiple grocery stores for us city-living folk we can comparison shop for just about anything.

Some examples of this;

We could easily call 10 different plumbers to get quotes where in smaller, more rural areas, there are simply fewer folks to query.

All of this competition serves to increase quality and drive prices down.

Another key element of comparison shopping are customer reviews.

Yelp and similar user-generated review websites provide profound insight. Mr. Frugalwoods and I use Yelp for just about everything–nothing beats analyzing businesses based on 500+ customer reviews.

Since we don’t have a garage, which is par for the course in urban homes, we’ve come to rely on our mad parallel parking skills.

Lessons are often proffered by yelling, gesturing, and otherwise frenetic maneuvers by other drivers.

Or, if you happen to be as lucky as we are, they’ll be offered by your eccentric neighbor who goes around shirtless all summer shouting out parking “advice.” It’s a real plus folks, let me tell you.

Do not, under any circumstance, underestimate the power of the Great Trash Finds a city has to offer.

Mr. Frugalwoods and I regularly tote home stellar items we’ve scavenged from the side of the road.

A sampling of our greatest hits:

Our notorious city-living trash finds make us more smug than Frugal Hound when she encounters a plus-sized urban rat.

It’s amazing the stuff people toss out in the city, yet it’s not surprising.

Folks move frequently in our region and many don’t own cars, which makes donating used items considerably more challenging.

The Boston-area Craigslist is a straight-up treasure trove.

Anything you want, it’s got it. Our entire house is furnished via Craigslist and we got some sweet deals.

This will also work in the other direction if I ever get my act together enough to list some of our cast-offs (which are currently clogging up our basement storage area…).

Residences are generally smaller for city-living dwellings, given how densely packed the populace is, and small living is frugal living.

Utilities are cheaper, plus, it’s less house to maintain, clean, repair, and furnish.

Many cities offer residents the ability to connect to the natural gas grid, which is usually vastly less expensive than propane or oil deliveries (which are more common in less densely populated ares).

The Frugalwoods city-living neighborhood is home to “the tuba guy”–a dude who marches up and down the street listening to a Walkman and playing a sousaphone.

I probably don’t need to point out that sousaphones have one volume: loud.

Yet, as quickly as he arrives, he departs with the faint sound of deep brass notes lingering in the breeze.

Who are you, oh ephemeral and enigmatic tuba guy?

Escape route (aka the airport)

Living 15 minutes from Boston Logan Airport has been a huge boon for us. We can take either public transit or a fairly inexpensive cab ride and then not pay to park our car at the airport–score!

Flights are also typically cheaper and more direct from a large city.

If you live in an affluent city, your property taxes might be very low. Ours are here in Cambridge thanks to the presence of two major research universities (Harvard and MIT) as well as a substantial number of corporate entities (particularly in the biotech, bioengineering, and software fields).

The hefty taxes that these behemoth institutions pay Cambridge make the city wealthy and cut property taxes, which is great for the little guy (and hound)!

Conventional wisdom would have you believe that cities are money-sapping traps and, while there are certainly pitfalls, it’s entirely possible and really quite easy to live an uber frugal life in the city.

Mr. Frugalwoods and I have heartily enjoyed our “city-living years” and I’m so thankful for the opportunities we’ve had.

We threw ourselves into it with very little knowledge and no experience, but it was a blast! If you’ve always wanted to try urban life but are afraid of how the finances will shake out, don’t be! Do it and do it frugally.

Discussion: Do you live in a high cost city living area? What’s your experience with urban vs. rural. vs. suburban living?

Post Contribution: Mrs. Frugalwoods blogs at www.frugalwoods.com about her journey towards financial independence and a rural homestead, which she hopes to reach in three years at the ripe ol’ age of 33. 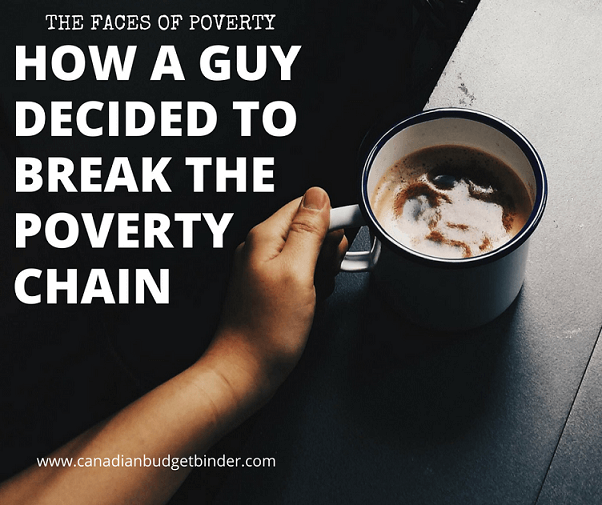 A CHANCE MEETING WITH A STRANGER CAN SOMETIMES PUT THINGS INTO PERSPECTIVE FOR YOU   Breaking the poverty chain seems like an easy thing to do especially if you’ve lived a life where money hasn’t been a stressful event for your family. You also don’t have to live in the hood to be part of… 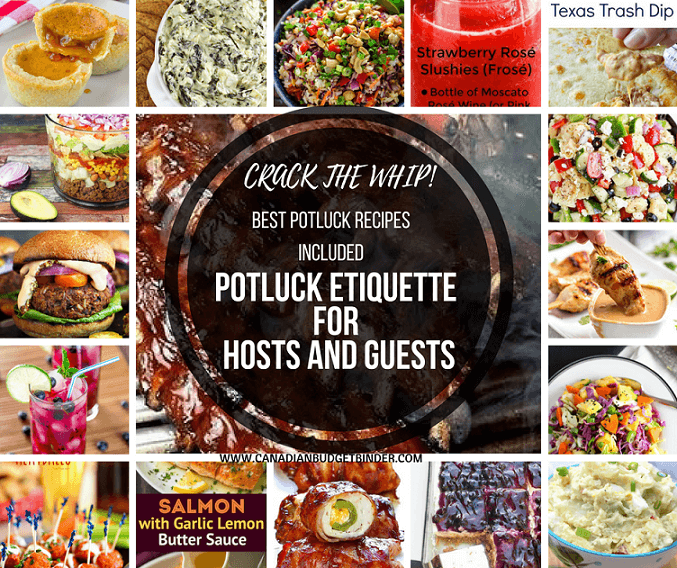 THE RULES AND RECIPE IDEAS FOR A FUN POTLUCK PARTY   Today I want to talk about potluck do’s and don’ts and how you can have a frugal party without extra expenses. Accepting an invitation to a potluck party means that you will put some thought into the dish you plan to make. This doesn’t… 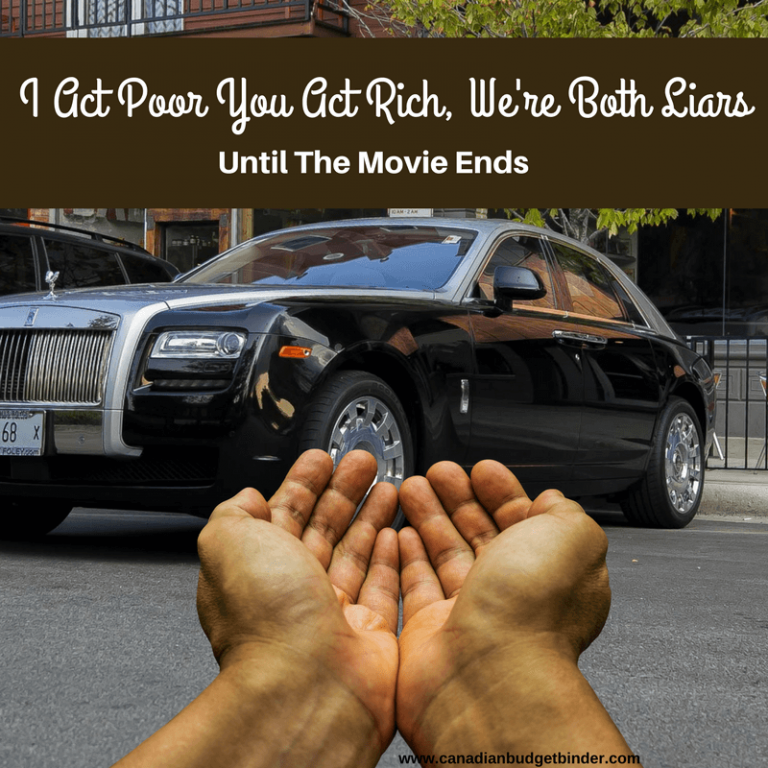 YOUR MOVIE STARTS THE MINUTE YOU CHOOSE TO PLAY THE LEAD ROLE   Have you ever noticed that there are people who have money but never talk about it and others who have nothing and boast about their wealth? Yes, me too and I believe the reasoning behind this starts with the person inside and… 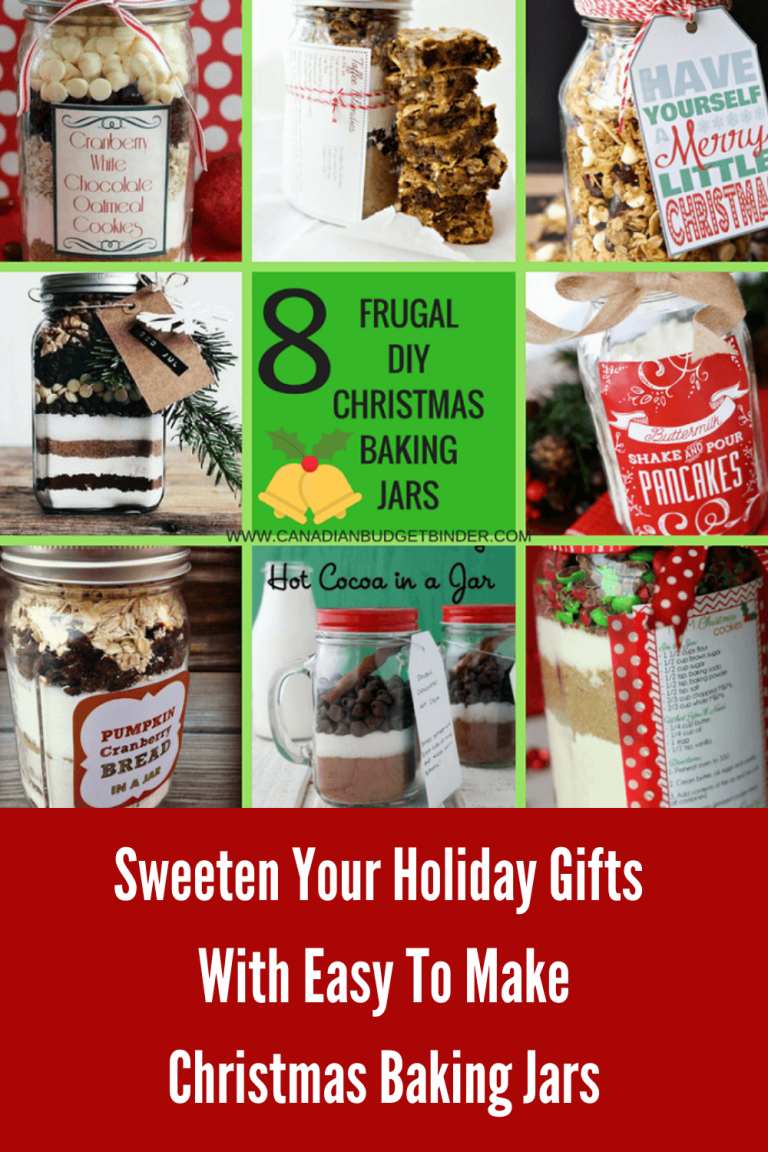 Spending and saving money was simple, so we thought. It was in January 2011 when we finally decided to start a budget. With no budgeting experience we took it upon ourselves to design our own budget. I’ve read many financial resource books by Gail Vaz Oxlade and am currently reading ‘The Wealthy Barber Returns” by David… 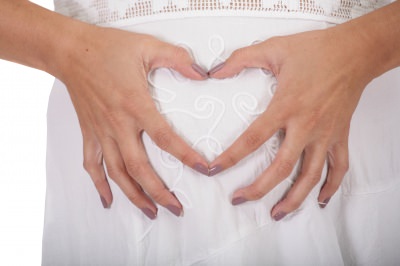 BUDGETING FOR YOUR NEW BABY   First time parents are not going to be shocked to learn that bringing their baby into this world is going to cost them some money. Think of everything that you use to care for yourself in a day, then keep adding to that list diapers, formula and so on. …