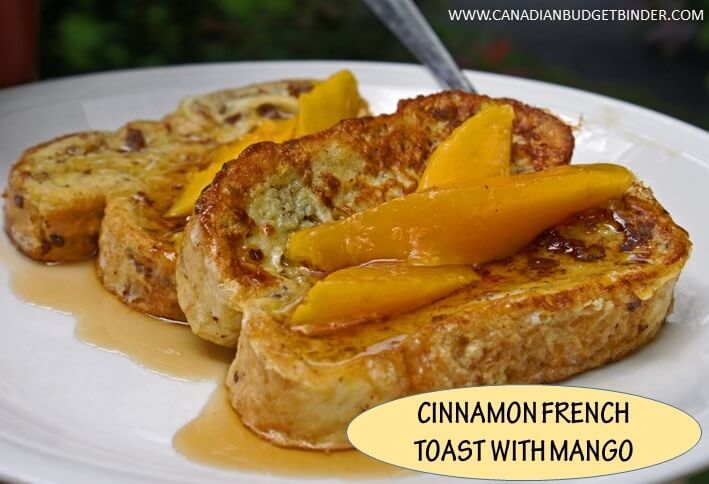 Breakfast foods for most people consist of muffins, oatmeal, bagels, cereals, smoothies, fruits, yogurt, eggs, bacon, ham, sausages, hashbrowns, toast and so on. Sometimes it’s nice to go the extra mile and splurge to make french toast or even pancakes.

I’m sure many of you out there will admit to eating breakfast on the run most days but it really is nice to sit down to a proper breakfast to savour the wee morning hours before work or on the weekend.

I’ve had oven baked french toast before and it’s good as well but it will take you a bit more time. This recipe is for the speedy person in you especially if you have a crowd of hungry eaters waiting at the table.

Our son is now a year old and once in a while we like to make what we call back in the UK, ‘Eggie Bread’ or in Canada, French Toast. He loves fruits especially mango so I went ahead and created this delicious yet simple Cinnamon French Toast with Mango Slices smothered in Canadian Maple Syrup.

We’re fortunate to have a family member who is able to make homemade maple syrup every year so we don’t have to buy it at the grocery store. It can run you anywhere from $9.99 a litre or more depending on what brand you purchase. It’s not cheap but it sure does pack a punch. I don’t know anyone who doesn’t drown their pancakes or French Toast in maple syrup because you want every bite to be saturated with flavours of the French Toast and the maple syrup.

Sometimes my wife likes to use Agave Maple Syrup in place of regular Maple Syrup which tastes nice as well. You can find Agave Maple Syrup in the organic section of most grocery stores or at the Bulk Barn. I’m not a fan of sugar-free syrup but if you fancy using that it certainly is an option. Some people opt out of using syrup and prefer a fresh fruit compote and yogurt on top of their French Toast. It’s entirely up to you.

How to cook French Toast

My Cinnamon French Toast takes about 10-15 minutes to make from start to finish so it’s a great breakfast to make on special occasions or even a weeknight dinner. The best bread to make french toast is to use a thick whole wheat or white bread that will hold up to being saturated in the cinnamon egg bath. Alternatively, you can use homemade bread or a cinnamon raisin bread.

Once I make the cinnamon, egg, vanilla, milk bath I let each piece lay inside it for a minute or two to soak up as much of the mixture as it can. This makes for a lovely rich Cinnamon French Toast. Once the bread is soaked I make sure my griddle or frying pan is nice and hot with a tablespoon or two of melted butter sizzling before I lay the bread in it.

The key to making the best Cinnamon French Toast is to make sure there is enough butter in the pan, a hot pan and that you don’t flip it until it’s golden brown. I like to leave the temperature dial around 7 out of 10 on the stove-top which seems to be hot enough. If I’m using the griddle which I prefer especially for making pancakes I will keep the temperature around 200 degrees.

As soon as both sides of the Cinnamon French Toast are golden brown I lay them on a plate, add slices of mango and lots of maple syrup. The best time to eat Cinnamon French Toast is as soon as it comes off the griddle and onto the plate. You don’t want to let it sit around as it will get soggy and you will miss all the wonderful texture that you created.

How to make Cinnamon French Toast

Cinnamon French Toast With Mango
Recipe Type: Breakfast
Author: Mr.CBB
Prep time: 5 mins
Cook time: 10 mins
Total time: 15 mins
Serves: 6
Making Cinnamon French Toast with Mango slices is so easy and fast that you can easily whip it up when you want something sweet for breakfast or any other meal of the day.
Ingredients
Instructions
3.4.3177

I hope you enjoy making my Cinnamon French Toast recipe which is one of our monthly treats and I hope you give it a try and let me know what you think. 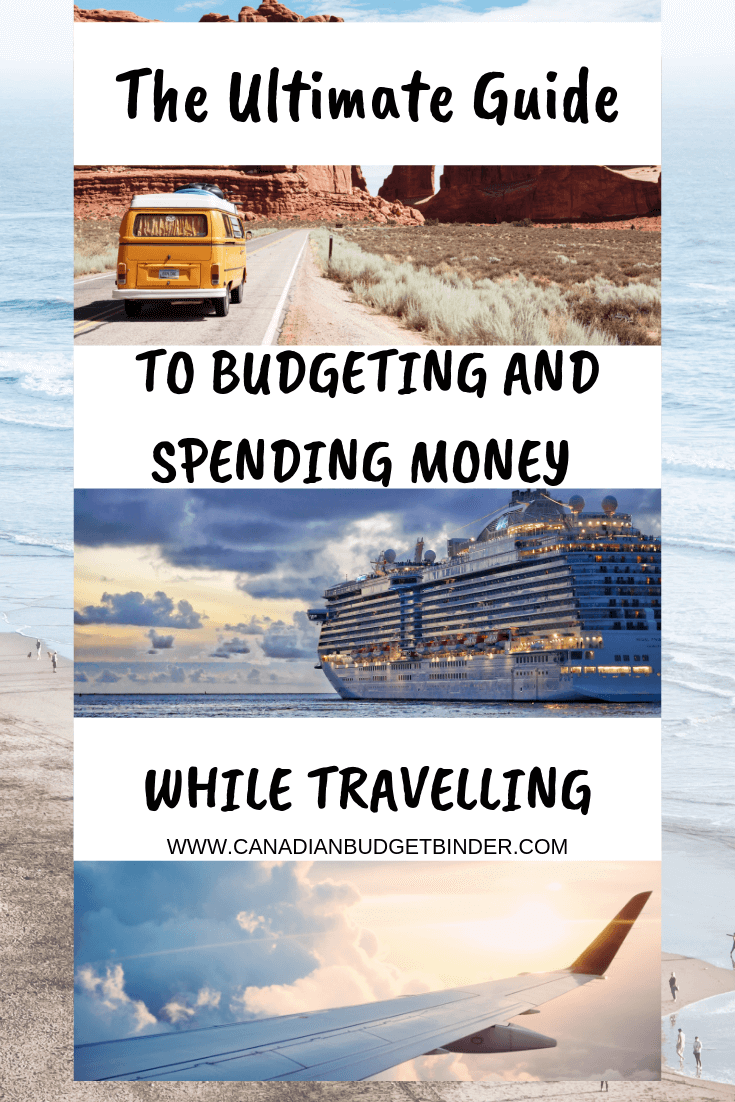 The Best Way To Travel Is With A Travel Plan And A Budget Whether you’re travelling by air or land you will need some form of spending money no matter the destination. When bringing spending money when you are on holiday it’s critical to consider safety and convenience. Travelling for free using Air Miles points,… 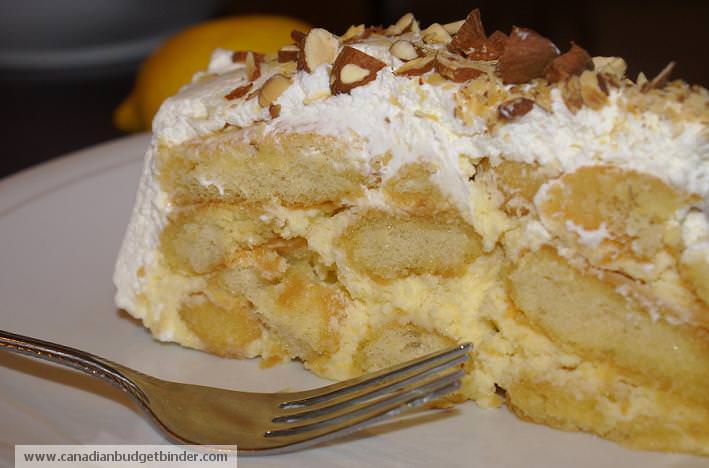 This Lemon Fridge Cake has been passed down the ranks in my family from my grandma all the way to my mum and now us kids. She would make it for any special occasion as did my grandma and I distinctly remember the smell of lemon permeating our house. Most often it was made… 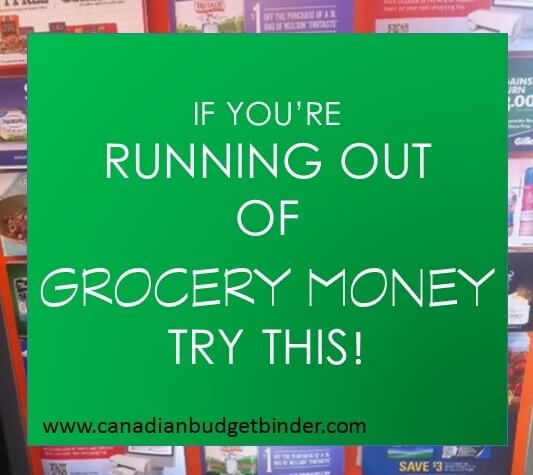 WHEN THE CUPBOARDS ARE BARE   Running out of grocery money before the end of the month is heartbreaking for anyone especially families with children. We all deserve to eat and should never go hungry but sadly this happens every day to people all over the world. Nobody likes to admit defeat but there are…

By: Heather Ferarr Mark and I got married in August 1996 at CFB Moose Jaw and purchased our first wedding rings at Consumers Distributing.  If you are too young to remember Consumer’s it was a shop you could go into and they had catalogues where you could pick items you wanted to order or pick up…. 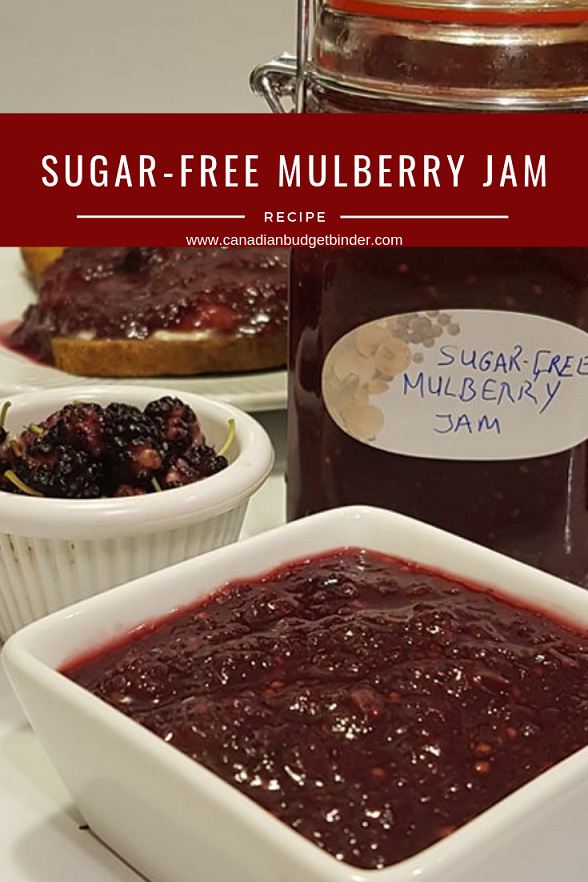 Sugar-free mulberry jam and made without pectin and perfect for those on a Keto diet or for diabetics. At the start of July in Ontario, Canada our Mulberry Tree is full of sweet, juicy black mulberries. Black Mulberry Jam Is Delicious And Simple To Make If we don’t harvest our mulberry tree of these beautiful… 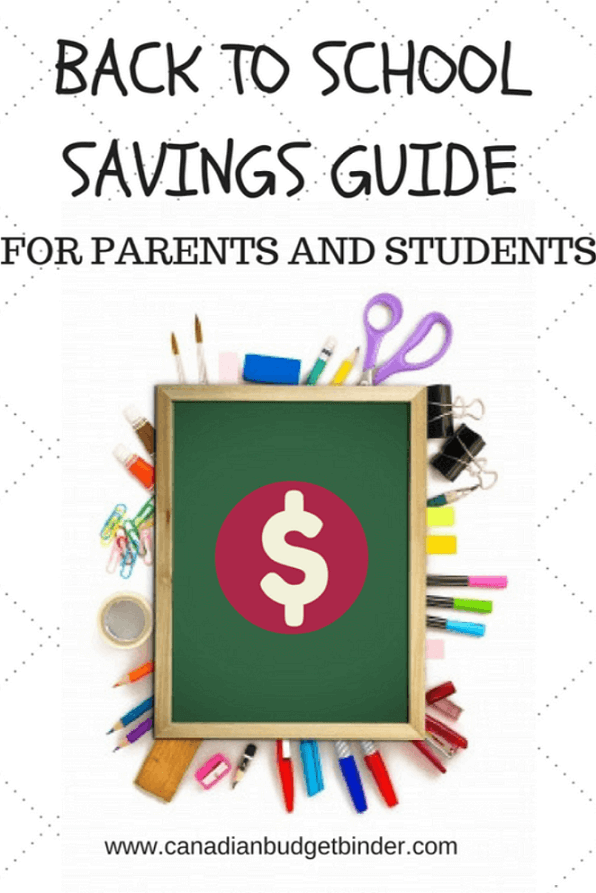 GET YOUR BACK TO SCHOOL BUDGET READY BECAUSE STORE SHELVES ARE STOCKED AND WAITING FOR YOU! The back to school promotion campaign for your hard-earned money is on as just about every store in Canada is ready for their biggest sales event during the month of August. I’ve been in and out of the education…