IN ONE POCKET OUT THE OTHER

Surviving on minimum wage is not easy in fact when I moved to Canada the only jobs I could find were minimum wage jobs although that was still a struggle at times.

Living in the UK was equally as difficult because prices for petrol and food not to mention housing accommodations were astronomical compared to what we earned.

I was already used to living on a tight budget and working hard to make ends meet to stay ahead of the game but I guess I expected more moving to Canada but knew I would have to work my butt off no matter what challenge I was given.

No road is an easy road unless it’s all handed to you on a silver platter but even then those people still fall.

Unless you haven’t heard the Liberal government is giving a $0.75 boost to the minimum wage in Ontario raising it to $11.00 an hour. They say this is in line with inflation but is it really enough to get by on?

I struggled to find work even with my University Degree from the UK because it wasn’t fully recognized in Ontario.

The hardest part was travelling to a job interview in a suit and tie only to be told as soon as I walked in that I didn’t have enough Canadian experience.

Whatever that meant, “Canadian experience” please…you bet it peeved me off after all of the research and prep work I did. It was as if HR failed to read my resume until the last few minutes before I showed up for the job interview.

I will admit that fueled a fire inside of me when I heard a so-called hiring professional say that to me and so she challenged me to go on with her dirty words.

I had to either go back to University to upgrade the degree I had already completed, take a minimum wage job or start my career over again with something totally new.

I remember getting a phone call from one place stating that they would love to hire me with my UK leadership experience. The pay was minimum wage working on some production line.

I declined the role because I knew that I couldn’t raise a family on minimum wage. They called me back over and over until they offered me a Team Leader position which I also turned down.

I know that I shouldn’t have been picky because a job is a job but I didn’t want to settle and to be honest I was lucky that I had enough emergency savings in the bank that gave me the opportunity to have choices.

Not everyone can do this but I didn’t want to end up in a job where I didn’t have the opportunity to move up in an organization nor use the skills that I had worked so hard at all my years in University.

No graduate students with tonnes of OSAP debt wants to work in fast food restaurants or retail stores but what I’ve come to learn in Canada is that it is a reality.

Minimum wage for most people is better than having no job at all. I believe we get out what we put into our lives and if we really want something we have to go for it.

I know it’s easier said than done because we may all have commitments in our lives but sometimes we have to make choices to get ahead or we continue to walk the path that we are faced with.

I know living on minimum wage for a friend of ours is awful. He drives one hour to work each way every day just to work for minimum wage and at the end of the week his gas and wear and tear on the car not to mention the time spent in his car wears him down.

His bills are not getting paid on time or he can only pay the minimum payment which keeps him in the credit loop for years on end paying boatloads of interest on meaningless items.

He just recently got approved for a quick loan to pay off his debts but the loan still remains as does the debt cycle for him.

Living pay to pay is reality for many people and whether the Liberal government thinks the raise to $11.00 for minimum wage will help depends on everyone’s personal situation.

The fact of the matter still stands that $11.00 is not much to live on and most people have to find second jobs just to get by or above that poverty level.

Even with the increase we may also have to face that everything else may increase or decrease such as goods and services and then the cycle continues.

If you have lots of debt, if you spend all of your money frivolously, if you live at home, if you are retired, if you are a student, if you have kids… if if if and if.

There are lots of ifs, and’s and buts but the reality is they can’t service our individual needs that’s up to us to conquer unfortunately and relying on the government to get us ahead is never going to pan out. Like some say though, at least they are trying.

In their own way they are telling us we are giving you a raise keeping in line with inflation, the rest is up to you to sort out. Fair? Nothing is fair in life. That much I’ve learned.

Even so if they gave minimum wage a bigger hike the businesses are already having to re-evaluate their budget and hope they can accommodate the wage increase.

I read in some comments on another post that if you are a business owner and can’t handle the increase with your business than maybe you shouldn’t be in business.

I don’t know how I feel about that but at the same time with the hike the entire chain will feel the crunch.

So although we may be getting a minimum wage increase over time we will see price hikes if need be to compensate and eventually that raise becomes null and void because you’re paying more for food or rent or whatever to compensate.

In the end, I decided to go back to school, rent, and start my career over again in hopes of making my way up the ladder doing something I loved.

I can say that I did give up years of going out and buying fancy clothes and eating dinners with friends for my education. I didn’t get any OSAP loans for school rather I used my savings to pay for my education.

Don’t get me wrong I still enjoyed those years but I didn’t go hog-wild spending money. I spent less than I earned which was $0 because I was in school and I struggled to find even a part-time job because I wanted to focus on getting the highest grades.

That is when I started to coupon which ended up saving us hundreds if not thousands of dollars over the course of a couple of years.

I also participated in focus groups for cash money and helped out friends for cash doing odd jobs. I did whatever I could to stay ahead.

We lived off of my wife’s income and I went on to graduate top of my class and was hired in a full-time capacity before I graduated from a head hunter who came to the school and met me.

It’s taken me years to get where I am and I’m still not even close to my potential which is great for me because it gives me more to strive for.

I’ve just recently started another new role in a professional capacity along with my full-time job and it’s the career that I’m going to end up settling in eventually because it’s what I wanted from the beginning.

I’ve learned lots from my time here in Ontario but the most important lesson that I learned is no matter where you live, no matter how much money you earn if you spend more than you earn you’ll never get ahead.

I also learned that if you don’t make enough then you have to find a way to earn more money. That is reality and no one will look out for you, but you.

With the minimum wage hike comes tears of joy for some and for others it’s not so happy of a time but it must keep up with the cost of living if anyone is to attempt to get ahead.

Take the minimum wage hike as you will and proceed with caution because when money comes in one door it’s surely to go out the window just as fast even if it’s beyond our own control.

The minimum wage hike might not make the people of Ontario rich but what we can rely on is counting all the things that we have that no amount of money could ever buy.

Do you think the minimum wage hike is fair?

Do you think it will help people get ahead of their bills?

What impact do you think the wage hike will have on businesses? 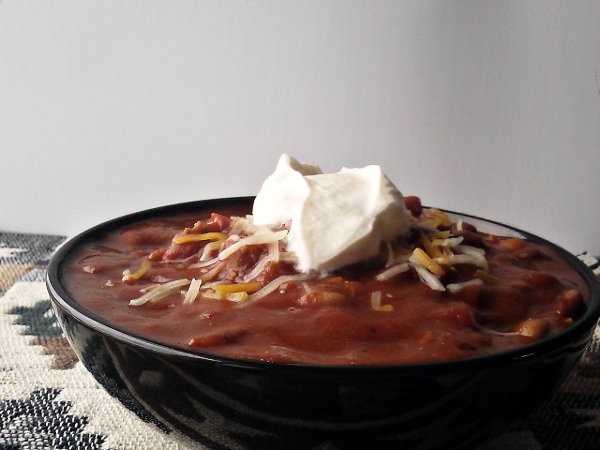 This weeks Top Recipe was chosen with it being Superbowl Sunday this weekend.

I though Edward Antrobus from If You Can Read You Can Cook has an easy slower cooker chili recipe for you to whip up that you might fancy.

It’s what he calls a six can chili and claims it doesn’t get any easier. Thanks Edward… this will go nice with a plate of nachos.

You can also find some other Super Bowl ideas over my mates blog One Smart Dollar where he shares how to Throw a Touchdown at your Super Bowl Party.

Well, that’s a wrap for this Friday’s grab a brew #57 so happy budgeting and I’ll see you here again next week when I do it all over again.