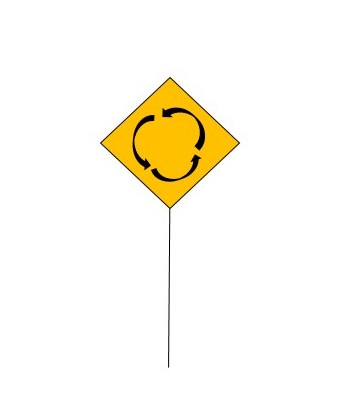 Driving Me Around The Bend

As I’ve driven around southern Ontario I’ve noticed an increase in the amount of round-a-bouts that are replacing the more traditional light controlled intersections that north Americans so love. There are benefits to having roundabouts mainly, maintenance free and cheap to run due to no potential electrical problems.

Those savings should eventually be passed on to the average Tax payer but I’m not a politician and where that money really ends up is anybody’s guess. Traffic flow is the next advantage, it allows  a constant controlled flow of traffic with zero intervention unless there’s been an accident which leads me on to my next subject.

Coming from a country that has a large amount of roundabouts it’s no big challenge to negotiate the circular obstacle. There is a simple rule in the UK about how to navigate a standard 4 entry/exit roundabouts that seems to have been made very complicated over here in Canada.

In the UK the rule is stay on the right side lane if you’re exiting the first right hand exit or going straight which would be the second exit. Enter the roundabout using the left lane if you are travelling off the third exit or returning in the direction from which you came, essentially making a u-turn.

But here in Canada, there seems to have been a little confusion with roundabout traffic rules. I’ve seen 2 lanes coming in on one entry but only a one lane exit on the opposite side yet the signage at the entry tells a different tale.

There are roundabouts where both left and right lanes exit on the second exit. There is no set standard for your roundabouts and may explain as to why some people just get plain confused when using them.

For your own information please refer to your provincial drivers handbook or through the government website to correctly navigate roundabouts.

When I came to Canada I was lucky enough to just swap my UK driving licence for a full G licence with no testing due to the fact that I’ve already driven for a number of years.

That’s very trusting of the Canadians, but instead of just assuming I knew how the roads worked here I purchased a drivers handbook and proceeded to read.

I have to admit, the information in said book was a little dismal. Instead of telling you right from wrong it’s full of grey areas like the over taking rule of passing on the left, but you can also pass on the right although they don’t recommend it.

The UK highway code is much more informative and tells you what you can (legally correct) and what you cannot do (illegal) in plain english.

I can see why the car insurance rates in Canada are higher, I’m sorry to say but the standard of driving in Ontario is poor.

This is not an opinion that I hold alone, work colleges that have been born and raised here feel the same way. Learning to drive a car with a standard gearbox (stick shift) rather than an automatic does help you become a better driver in my opinion because you have to concentrate more when learning.

Not only that, but when you’re out on the highways a standard transmission gives you better control over the vehicle by being more in tune with what the vehicle is doing.

Where are you going?

There are amber or red coloured lights on all four corners of a standard car but most people seem to think their use is optional.

I’ve never known a place where so many people don’t bother indicating their intentional direction and just pull out, pull in, over take or under take with no prior warning.

The summer months are the worst and strangely enough when the snow storms hit indicators suddenly become everyone’s best friend.

How many people remember to get their vehicle winter ready?  Keep yourselves safe out there especially now that winter is just around the corner.

It makes me wonder though if 4-6 months of winter driving takes all the concentration out of people so by the time the weather gets better everybody lets loose and just forgets how to drive.

I’m no professional driver but I do pride myself on never having an accident since the day I obtained my licence at the age of 17, nor any parking or traffic tickets.

Drive safe and save money

Sure, it all sounds a little boring and a little safe but good driving can save you a lot of money.

There’s cheap or cheaper insurance for starters, no tickets to pay for, no damage that I have to fork out money for and no deductible to pay for because I’ve never claimed, never lost any time from work due to an accident. Being safe out on the road is as much about your own protection as it is about the safety of other road users.

Most of this post is about driving and a little about what annoys me but I’m sure most of you have experienced at least one or more irritating habits that manifest themselves in other people’s driving techniques.

The center lane hogger is a personal source of irritation for me although I’m not sure why so many people choose to do this. There’s a slow lane on the 400 series of highways and the lane is there for Mr. C. L. Hogger, so why doesn’t he like using it?

The last-minute decision has caused a couple of close calls for me when people decide to come across 2 lanes of traffic to exit a 400 series highway because they either forgot where they were going or they’ve got something far more interesting going on than concentrating on the job in hand, driving.

Speeding up to over take and then proceed to sit at the lights for even longer is just plain confusing, maybe Canadians like sitting in cars looking at red lights? You know if you watch the light changes you can actually adjust your speed to avoid coming to full stop or even avoid most of the red lights altogether.

Think about your actions when driving, would you be just as forgiving if someone caused you to have an accident because of their terrible driving?

It might only be something as small as not indicating but causing an accident could get you in a lot of bother because you would be breaking the law. I think the technical term is failure to indicate intended direction or maybe you can correct me.

After the drivers test

It just seems that the basic driving 3 step premise of Mirror, Signal, Manoeuvre is quickly forgotten once the license has been obtained.

I once witnessed a rear end collision at a car park exit, the best of it was both vehicles were stationary until the car in front decided reverse gear would be far more entertaining and proceeded to front end collision the car behind.

I’d like to see the explanation on that insurance claim.

Quite possibly the worst decision anyone makes is the rash left hand turn. Mrs CBB gets in a bit of a fluff every time she can’t see traffic coming from the passenger seat. I could say she’s a bit of a back seat driver, but she’s not, she just has concern for our safety at heart. I don’t blame her as this seems to be the most common accident I’ve seen on Ontario roads.

So, if you think roundabouts are the wave of the future in Canada I hope you are right. The roundabout is much easier to use and can get us from point A to point B much faster than having to wait at a light controlled intersection. Plus, no more man hours spent fixing broken lights or having police out to direct traffic.

A roundabout is similar to having landscaping that requires little to no maintenance in my opinion and is well worth the money spent to implement if a city can afford to get the job done right.

What are your thoughts about roundabouts in Canada?