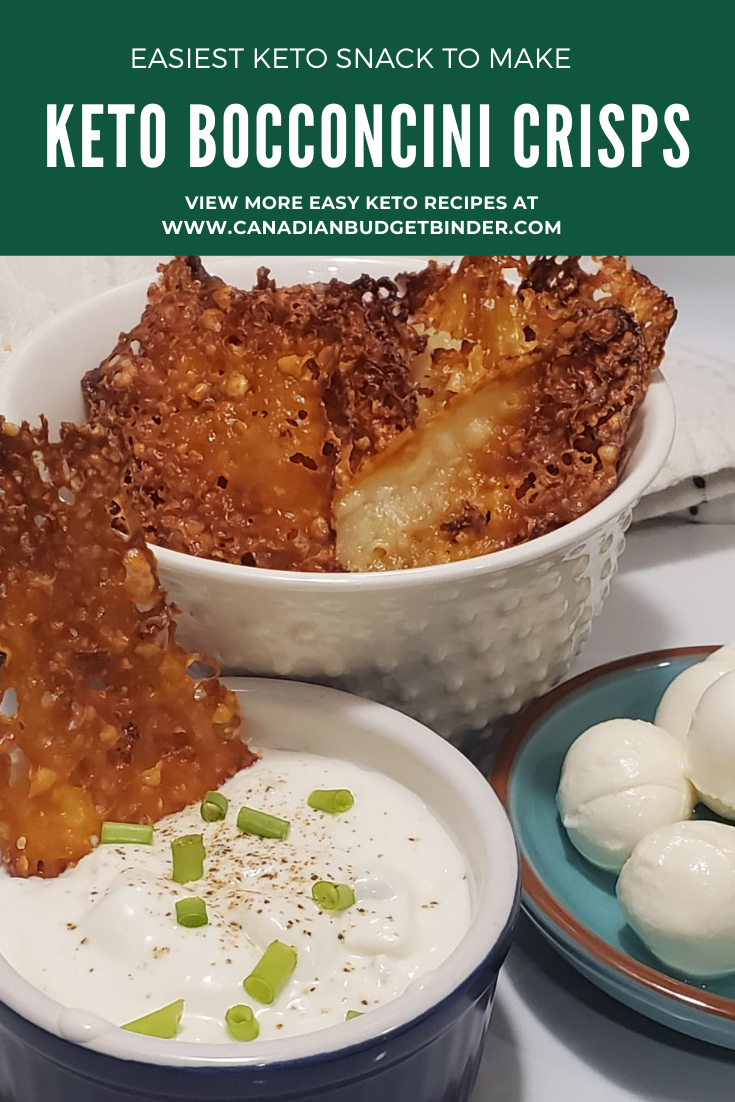 If you’re searching for keto appetizer recipes for the holidays these bocconcini mozzarella crisps are it.

Don’t freak out because it says Keto either as it’s just mozzarella and keto-friendly.

The coolest part is that this recipe involves only one ingredient. Guess what it is? Ha!

I was in the kitchen last week and Mrs. CBB took out the jar of bocconcini that we bought at Zehrs for 50% off.

We’ve made cheddar crips ad Parmigiano crips before but we wanted a quick recipe and bocconcini is dead-easy to make.

When you follow a keto lifestyle just about everyone craves something crispy and I won husband of the year for this recipe.

Not only are the bocconcini crisps crunchy but we used them in a homemade dip and as an appetizer.

Since we are hosting Christmas this recipe will be offered as an appetizer and plain with a dip on the side.

Sometimes I get these crazy recipe ideas and I go for it to see what happens.

This was a winner. 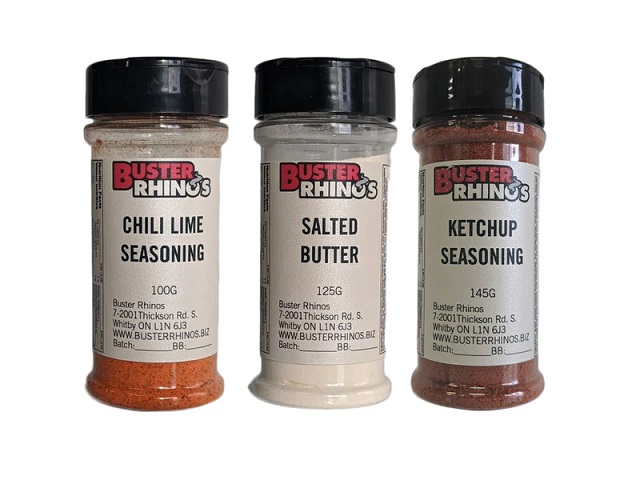 At Costco, we have tried the Parmigianno Whisps which are great but some people find them too powerful tasting.

They also carry a cheddar crisp that is good but again can be overpowering with the cheddar cheese flavour.

Moon cheese is also available but I find them way overpriced for what you get.

With these bocconcini crisps, you are in charge of what you want them to taste like as they are mild tasting.

We’ve added salt as well we bought a variety of Buster Rhino’s seasonings.

Unfortunately we were just informed that Buster Rhino’s has closed down.

You can find seasonings at the Bulk Barn and the grocery store but read the ingredient list.

Our favourites are dill pickle, ketchup, and chili lime seasonings to flavour the bocconcini crisps.

As soon as the crisps come out from the oven I will sprinkle the flavouring on top, flip them and do the bottoms. 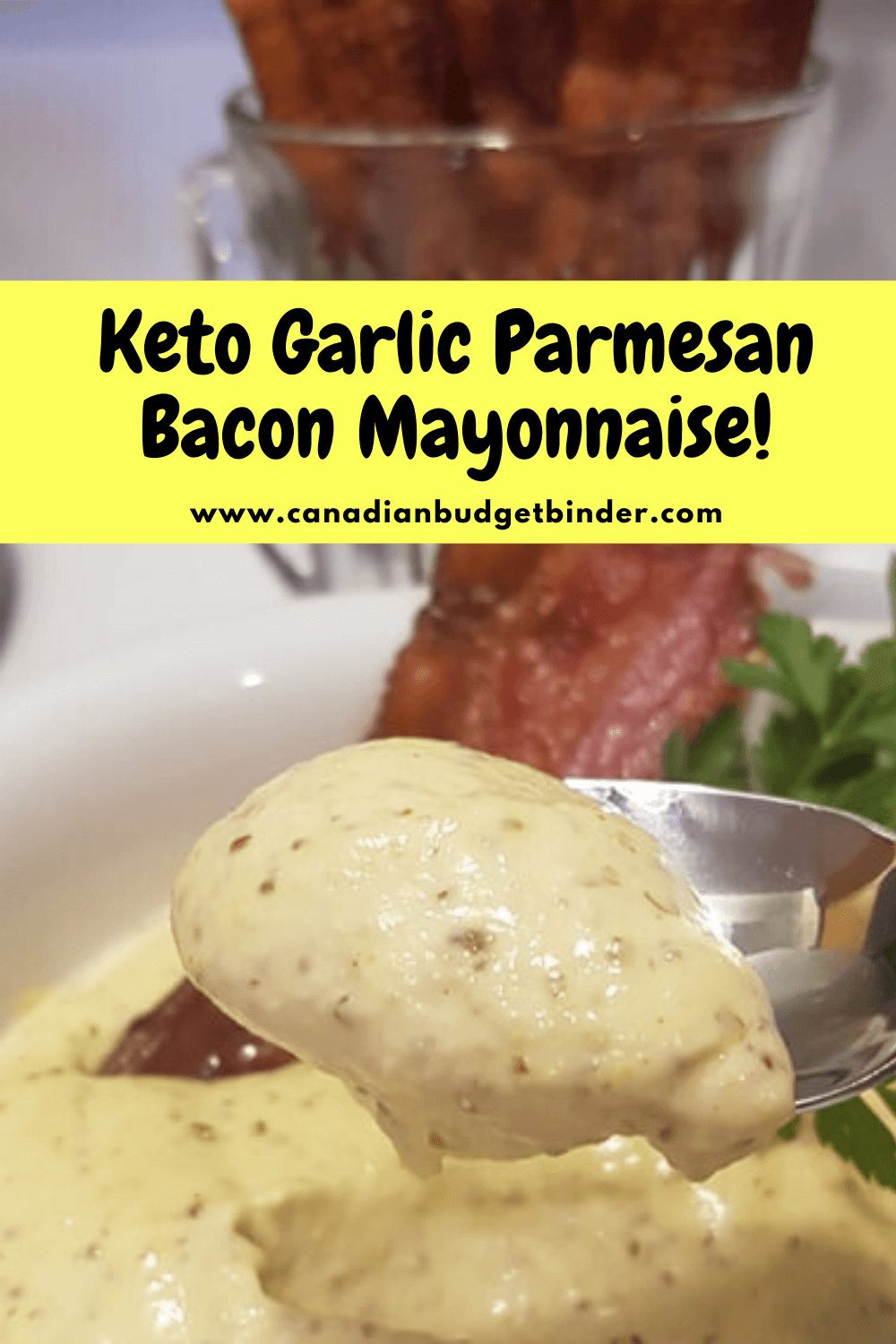 If you want to leave them plain but make a dip such as a spinach dip, avocado mayo, or queso dip you’ll go wild for them.

We’ve also used the crisps as appetizers with a slice of a seedless cucumber and tuna salad. They were the bomb!

You can top the crisps with so many different textures such as crisp veg, salmon, egg salad, homemade sugar-free jam. 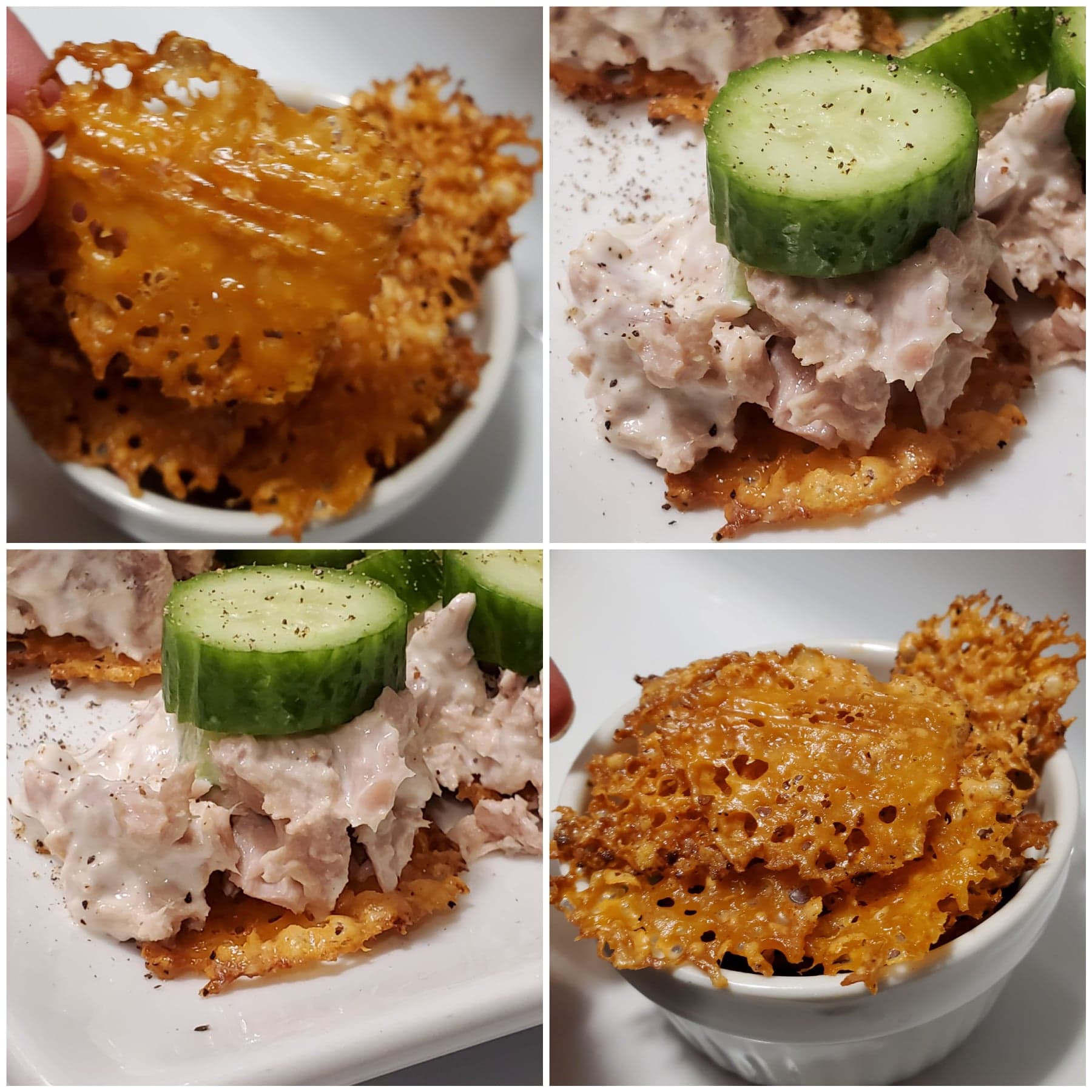 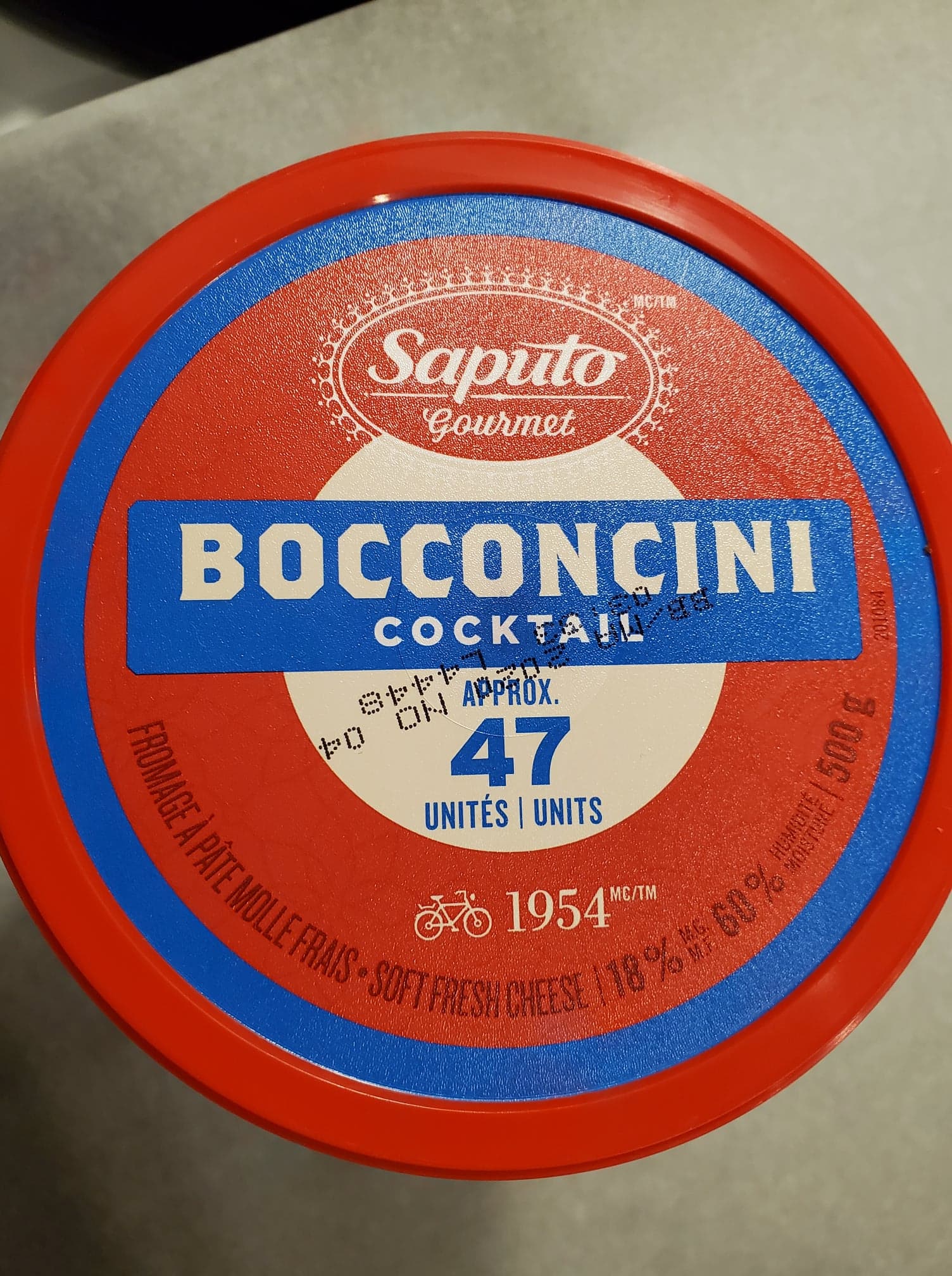 Made from cow’s milk unripened bocconcini has a mild taste and a semi-soft texture different from mozzarella or buffalo mozzarella.

Bocconcini are small oval cheese balls that are lightly brined and come in plastic containers in the cheese department.

You can buy the mini version or the larger-sized however both are the same apart from their size difference.

For the crisps, I used the mini bocconcini but you can use either or depend on how big you want your crisps.

Can you eat bocconcini raw from the container? 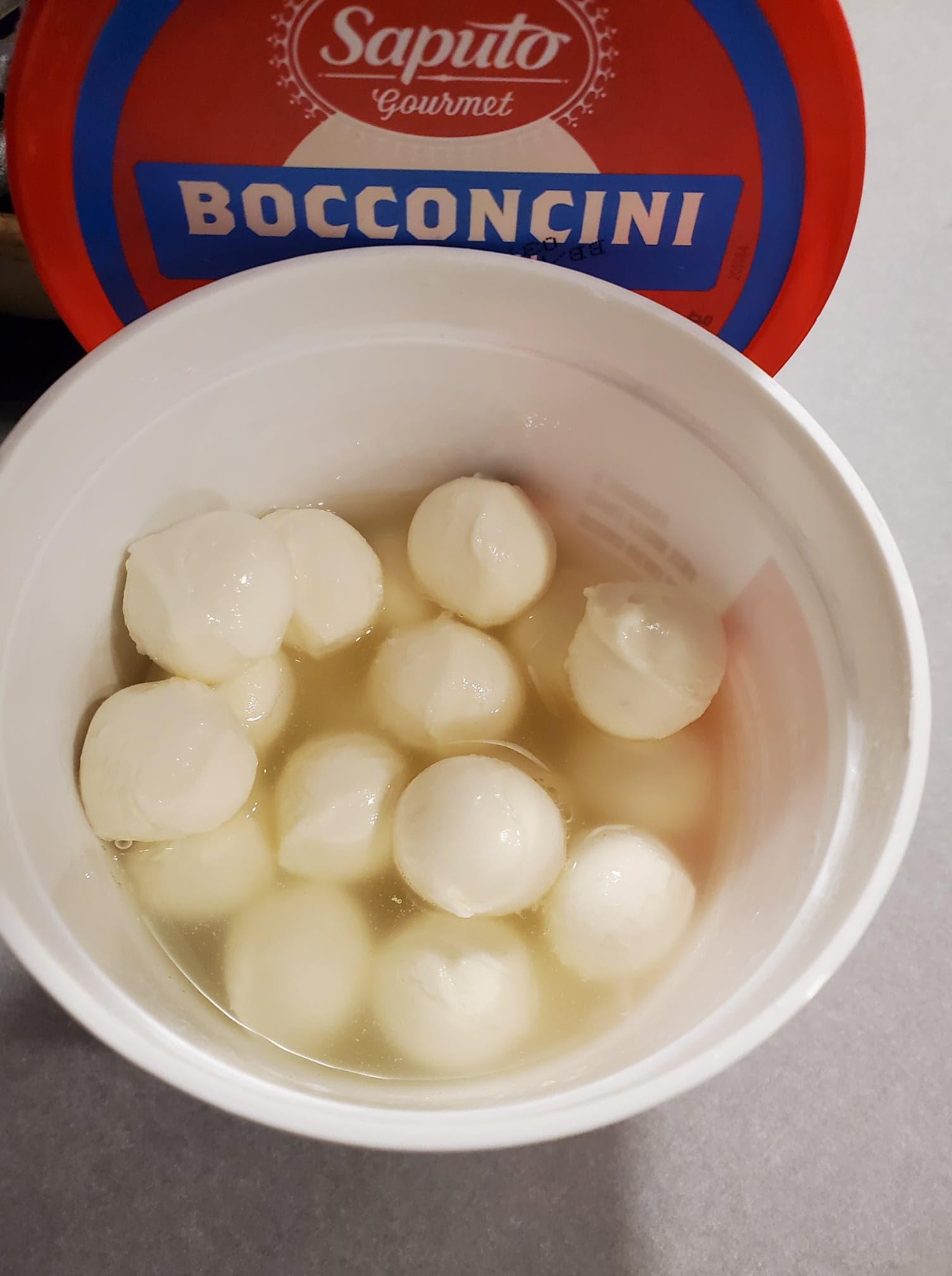 Absolutely, in fact, you might catch Mrs. CBB with a fork and the entire container.

Often times we buy a big bucket of bocconcini at Costco as they are cheaper than the grocery store.

At times the grocery store will have the cheese on sale for those of you who don’t go to Costco.

Typically a large container at the grocery store will cost about $8.99.

How To Make Keto Bocconcini Crisps 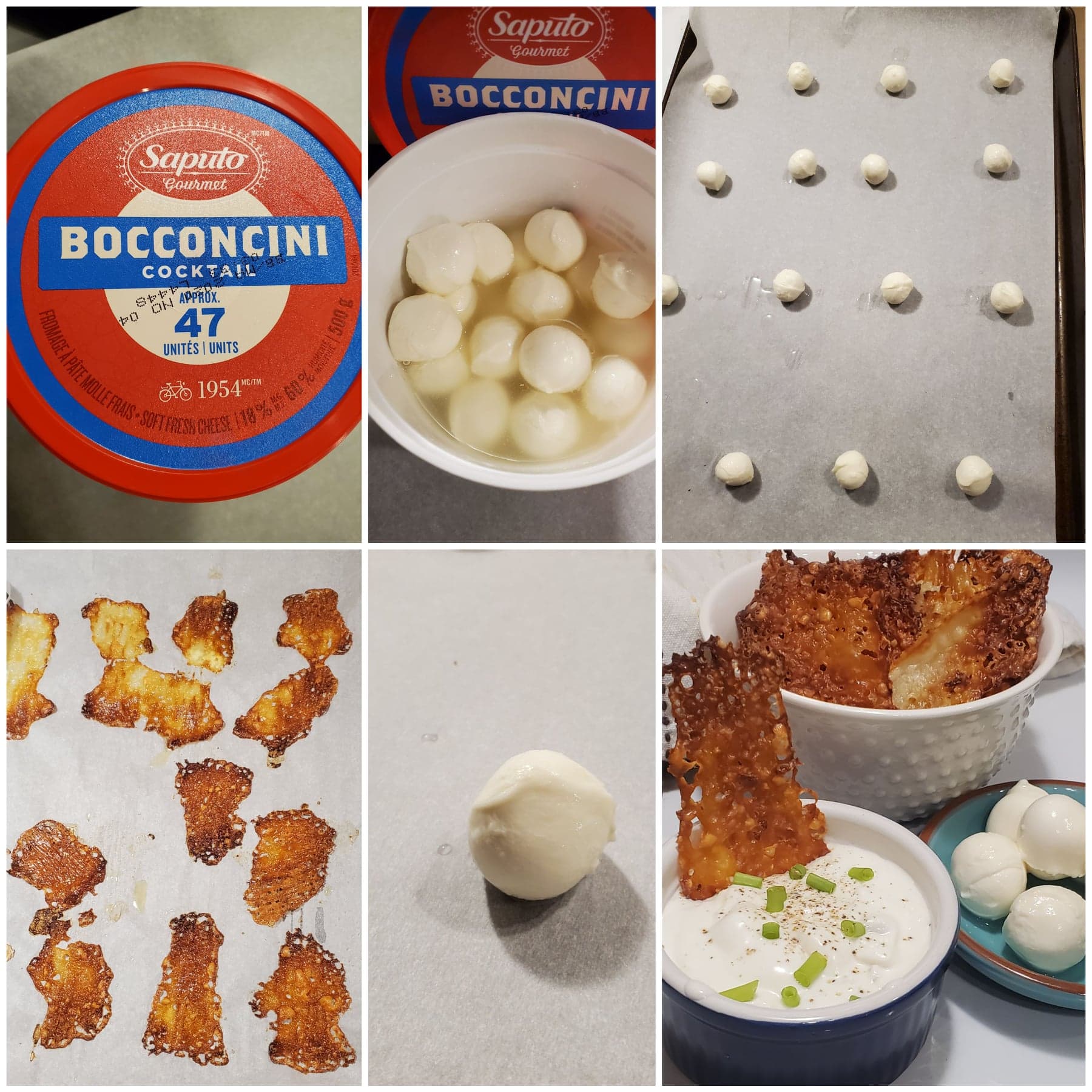 This is seriously the easiest keto recipe I’ve ever come up with.

Preheat your oven to 300 degrees 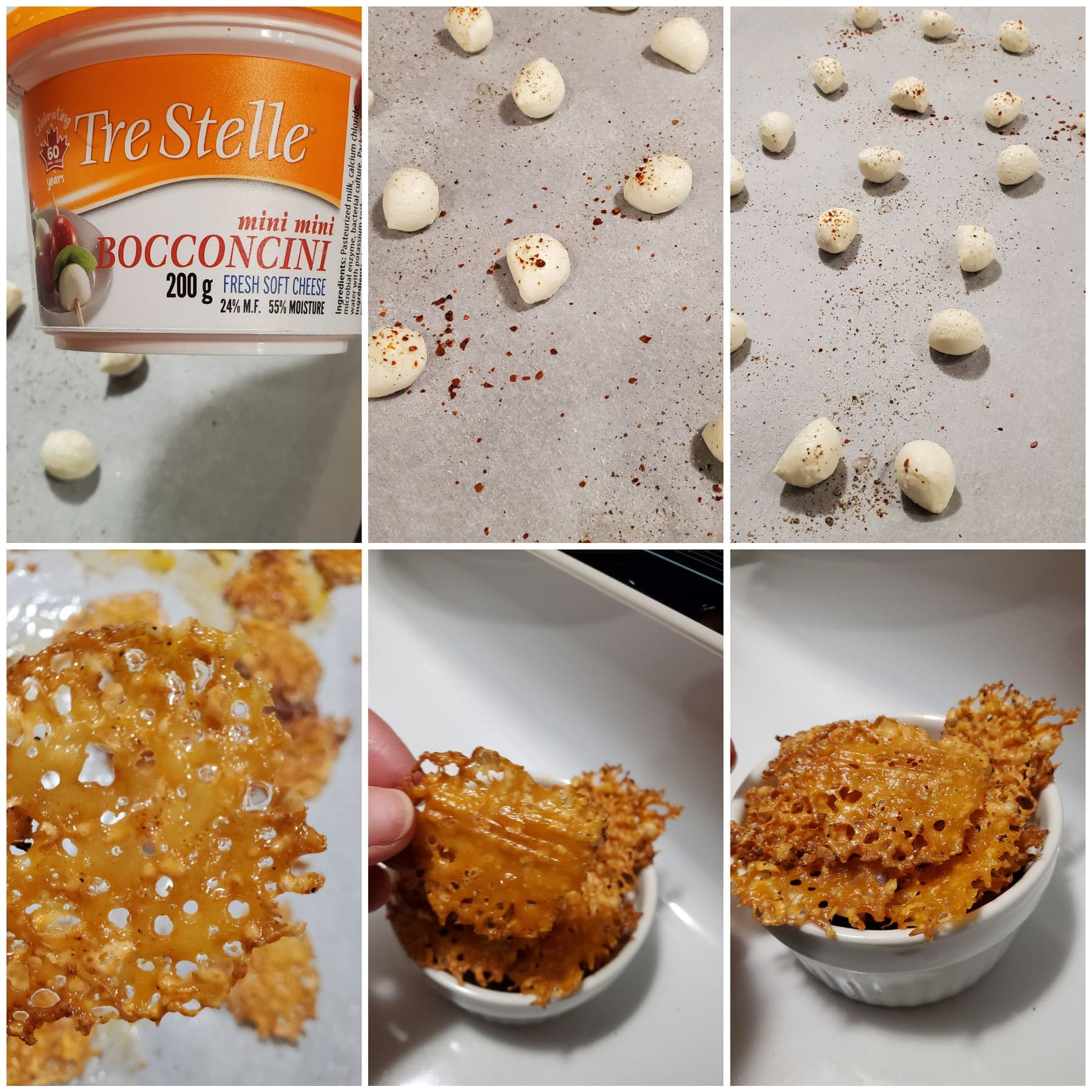 On a parchment-lined baking sheet or lined with Silpat set the balls 4 in a row.

You should get about 12 on a regular baking sheet.

Bake for 10 minutes or until they are golden brown so check on them often.

Allow them to cool for 5 minutes and do it all over again until your bucket is empty.

Once they are cooled set them in a bowl for your guests with a side or dip or make appetizers with them.

As well, you can top the mozzarella with seasonings before they go in the oven or as soon as they are out of the oven.

I tested both ways to see if the seasoning would stick to the crisp and they both work.

That’s it, my friends, keto or not you’ll love these and the best part is you can make them while your guests are chatting. 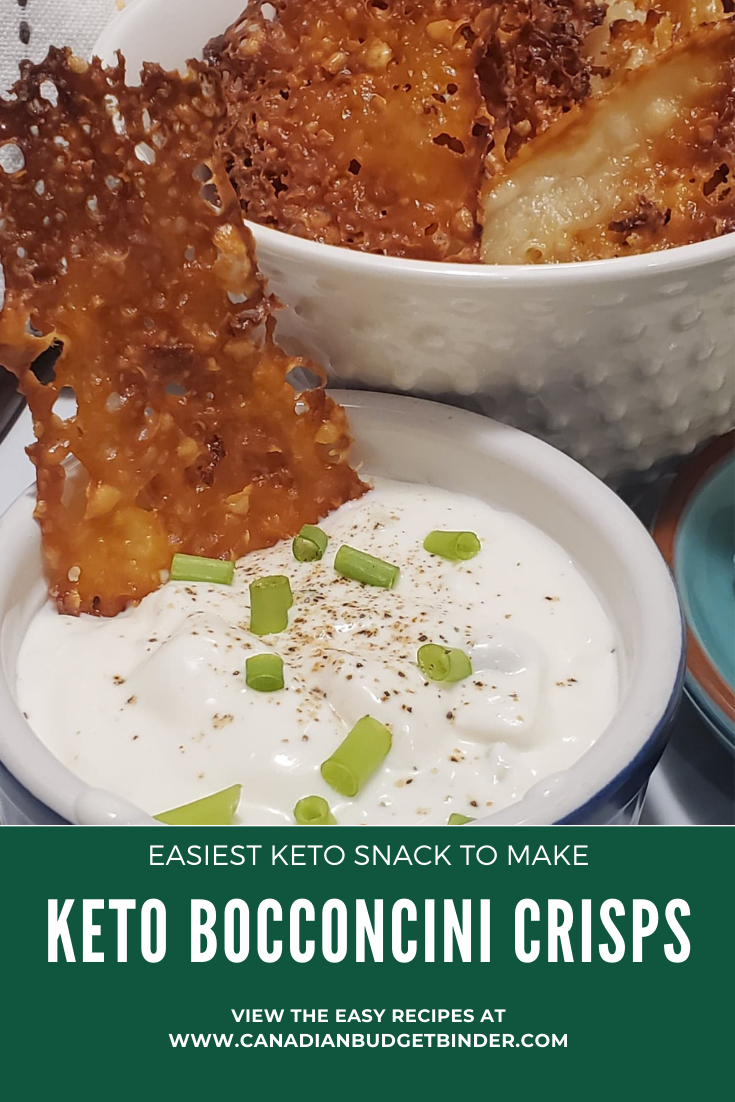 Please bear with me as I’ve changed my recipe plugin and am manually updating all posts. Thanks.

Give this recipe a try and I promise you that there will be no more grating cheese to make keto snacks.

Discussion: What seasoning would you use on your mozzarella crisps? What dip would you make? 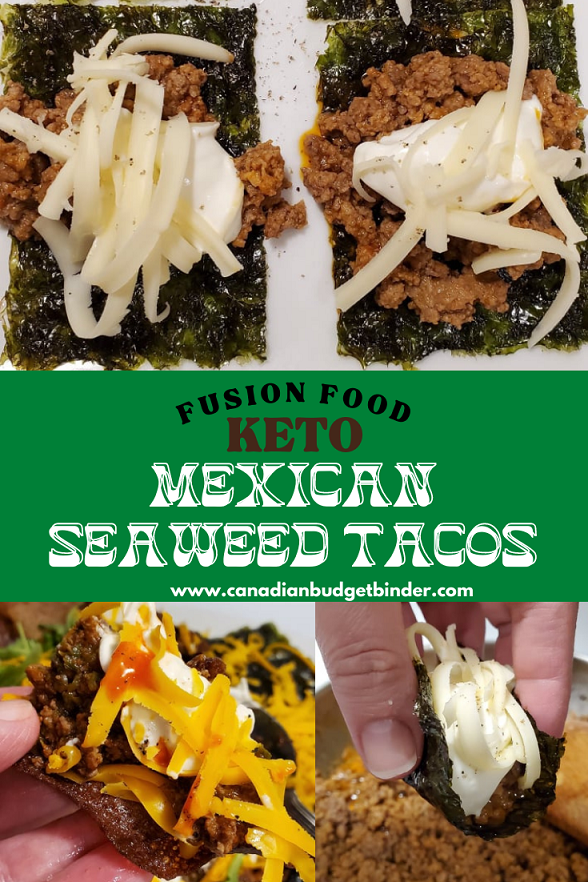 Fusion Mexican Seaweed Tacos are flavorful, inexpensive and keto-friendly. These seaweed keto snacks were a hit at our back garden party. 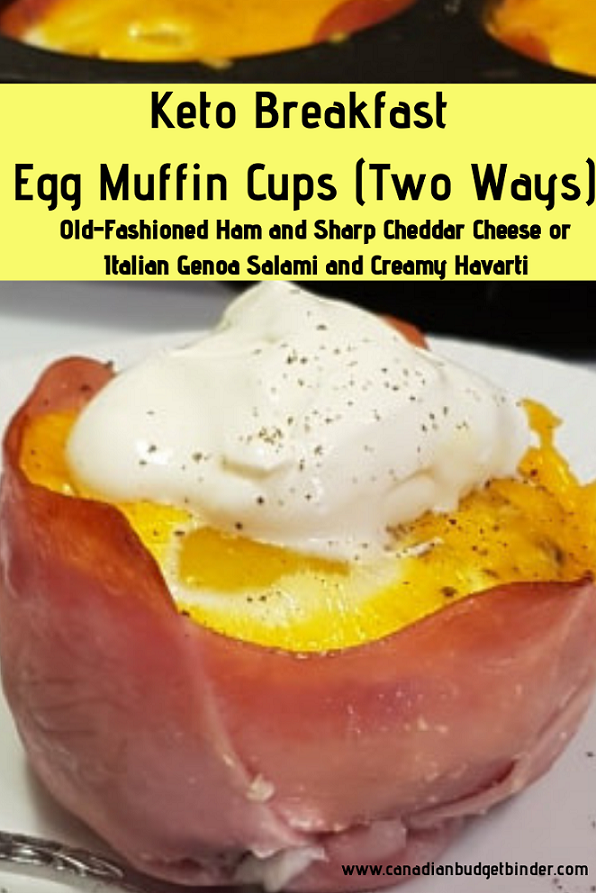 MAKE EGGS AND IMPORTANT PART OF YOUR HEALTHY DIET The perfect protein-packed breakfast on the go. Whether you are on a low-carb diet or keto diet breakfast egg muffin cups are something all egg-lovers must try in order to appreciate them. Cheesy Ham cups and Italian Genoa Salami egg cups with creamy Havarti cheese are… 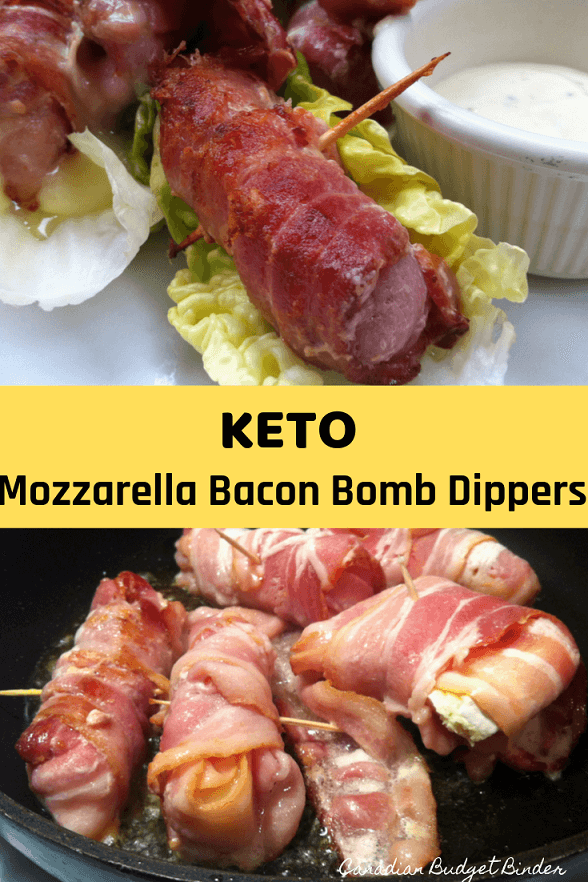 Melted Cheese And Crispy Bacon Bursting In Your Mouth Get ready to experience the most amazing snack ever, Keto Mozzarella Bacon Bomb Dippers. These roll-ups are the perfect party food or starters for a dinner party and they won’t cost you a fortune as other appetizers will. When my wife had this idea to fry… 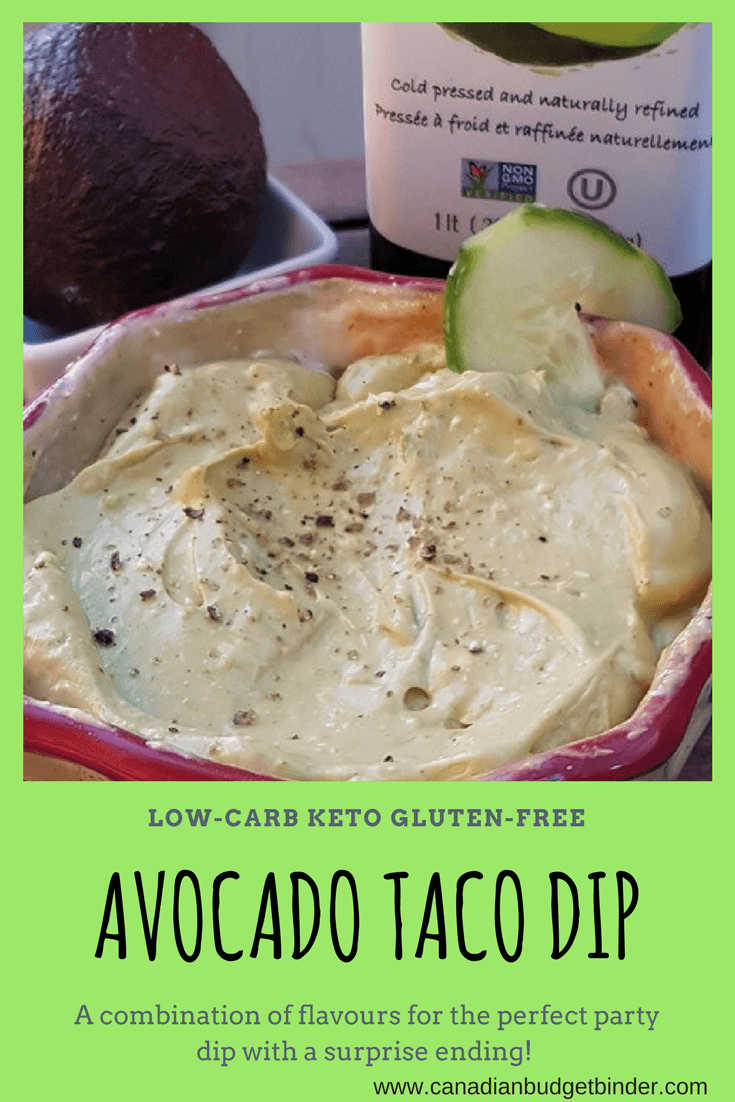 THE BEST PART OF THIS PARTY DIP IS THE SURPRISE AT THE END Creamy avocado taco dip surprise probably has you wondering what on earth I’m talking about but trust me when I say the you will be happy to find out. This avocado taco dip is so easy to make and you’ll have it… 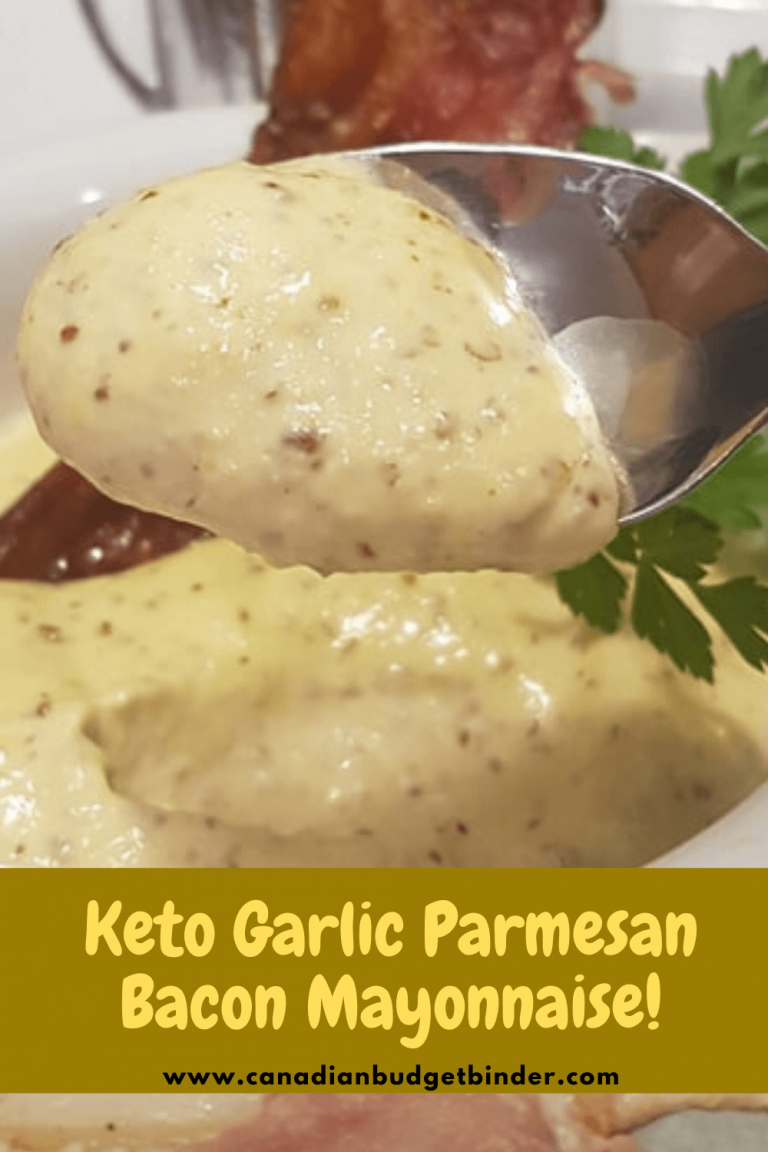 7 INGREDIENTS TO GET THE TASTIEST GARLIC PARMESAN BACON MAYONNAISE Don’t throw out your bacon fat my friends it’s full of flavour and the star of my Keto Garlic Parmesan Bacon Mayonnaise. Bacon and Mayo go together and I don’t care what anyone says, it tastes delicious as a dip or bacon sauce for your… 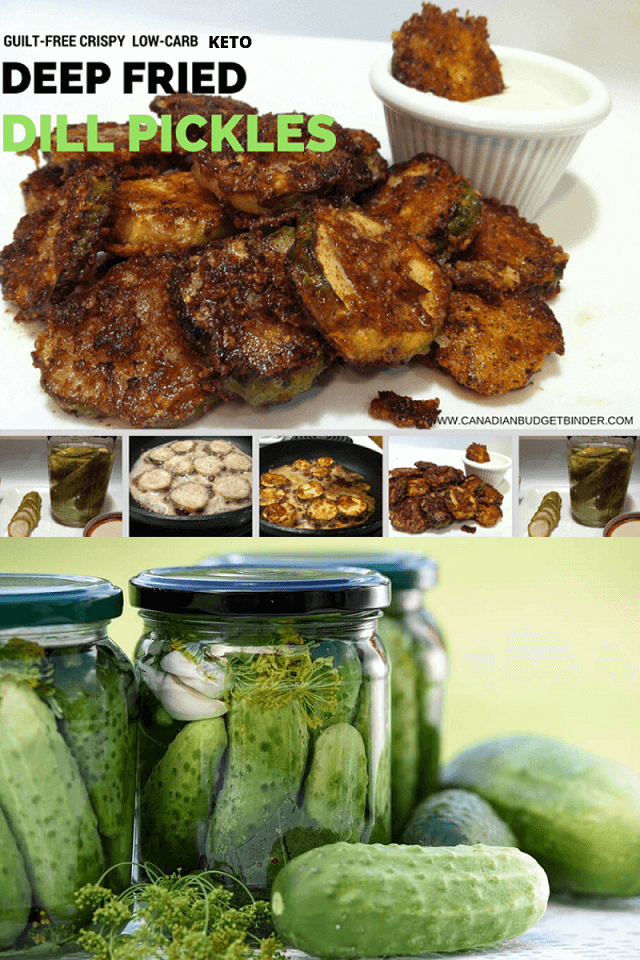 Keto Snack Time Begins With Crusted Dill Pickle Chips This is the recipe for keto deep-fried pickles that you don’t want to turn away from especially if you’re a dill pickle fan and not interested in the extra carbs from the thick batter. The first time Mrs. CBB and I had deep-fried pickles was when…