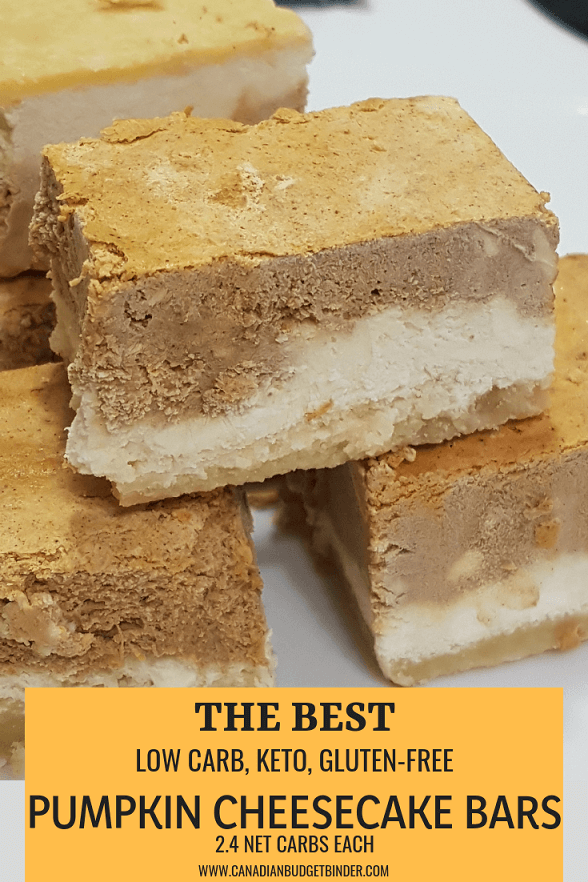 You won’t even know that it’s keto, ow-carb, sugar-free, gluten-free and very easy to make at home.

The best part about this recipe is that you can turn it into a pumpkin cheesecake pie or a round cheesecake as it’s versatile and because sometimes I feel like slice of pie instead of a bar.

The secret ingredient in this recipe is LOVE, haha no it’s the full-fat sour-cream which adds that moisture and tangy flavour that you want in a pumpkin pie.

You will also find the very thin almond flour crust has a slight almond extract flavour which we adore but is optional. 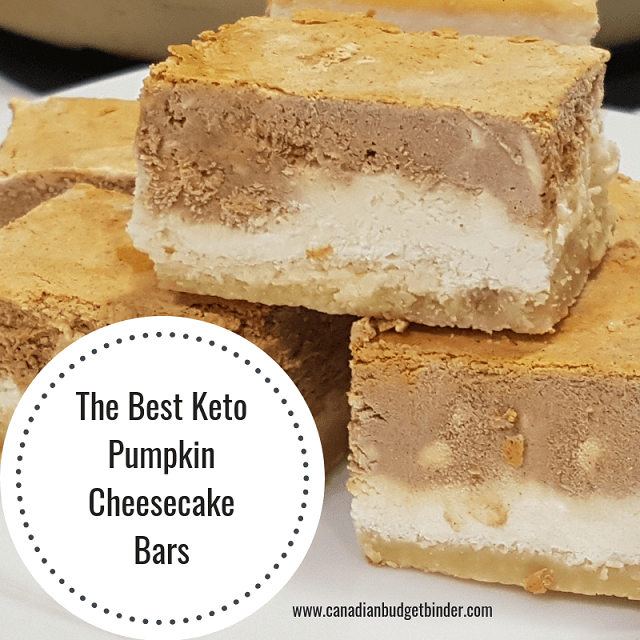 I’ve read so many comments on social media from low-carb, keto foodies that they would rather buy their foods then make them.

Honestly, it’ s dead easy to do and you will save yourself LOADS of money.

Anything that says gluten-free, low-carb, keto and sugar-free will add a chunk to your grocery budget so don’t fear the kitchen.

Any food blogger who doesn’t post at least one or two pumpkin recipes in the Fall likely doesn’t eat pumpkin or just can’t stand the sight of seeing any more pumpkin recipes online.

I on the other hand am in the middle, I don’t like them but I don’t hate them.

One of the best things about the Fall is that pumpkin is in full swing as are tonnes of other squash that are inexpensive to buy.

The weeks leading up to Halloween you will notice the price of pumpkins drastically drop especially the pie pumpkins.

We purchased one for a whopping $0.99 this week which will end up roasted and stashed in the freezer for next season when I start my pumpkin recipe marathon again.

Actually, this year I didn’t do too much in the way of pumpkin for Mrs. CBB but I did manage to work on these pumpkin cheesecake bars which turned out delicious.

I’m not a huge fan of pumpkin so coming from me that’s like getting a high-five times two.

Using A Keto Almond Crust Base

In order to keep the pumpkin cheesecake bars gluten-free, keto and low-carb we went with an almond flour crust but a thin one.

It’s not as thick as the caramel cheesecake or lemon squares but you can most certainly make it as thick as you’d like.

We used a square spring-form pan for this recipe which I ended up chucking in the bin after we were done using it as the enamel was coming off and I didn’t want it to end up in my baking.

This is a good time to say, buy good bakeware such as this Norpro 9-Inch by 9-Inch Nonstick Square Springform Pan

It doesn’t have to be over the top expensive but be aware of what you are buying.

This was my mistake as I found it at Value Village and was more interested in the shape of the spring-form pan than I was the quality.

Any how I managed to get one beautiful pumpkin cheesecake out of it so I’m happy about my lesson learned. 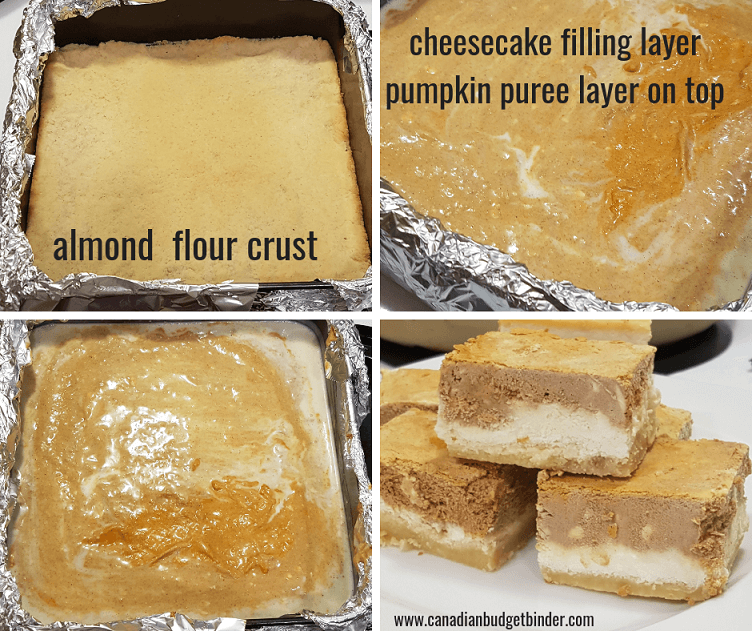 If you don’t fancy making bars you can make one giant cheesecake instead.

I recommend that you line your pan with Parchment Paper

as well wrap tin-foil on the outside of the pan as it will sit in a small water-bath to bake.

I’ve always found cheesecake to be moist and delicious when water-bathed rather than just sat in the oven on a rack.

Feel free to use a large, round spring-form pan if you’d like or a 13 x 9 Inch Oblong Pan

Either way whatever pan you use it will work out as the recipe stays the same.

The possibility of a thicker crust or thicker filling may be your end result and alter macros. I know, horrible right?

You will want to watch your cheesecake though as ranges differ in heat so it may bake faster or slower.

You will know when your almond crust is done as it is a golden brown colour yet slightly blonde or beige.

How To Tell When Your Keto Pumpkin Cheesecake Bars Are Set

The pumpkin cheesecake bars will jiggle and set on top or if you touch it you will leave a slight imprint.

Remember that the crust is already baked and all you are really doing is baking the cheesecake layer and setting the pumpkin layer.

Once you have your almond flour butter crust pressed into your pan, baked and cooling go on to make your cheesecake batter and your pumpkin spice puree and layers.

I’m one to take things slower in the kitchen because I hate burning anything and am always keeping an eye out on my oven.

For our pumpkin cheesecake bars we used cream cheese and mascarpone cheese but you can simply use 3 blocks or cream cheese which will work just the same.

The mascarpone has a bit of a sweet taste to it and we got if for 50% off so that’s why we used it.

It’s not often we find a great deal like that on a premium product.

I also suggest having it left out at room temperature for at least an hour as it’s far easier to work with and creates a silky finish to your pumpkin cheesecake bars.

How To Make Homemade Pumpkin Spice

A simple coffee-grinder/spice grinder is an essential kitchen tool for any low-carb, keto foodie as you can take granular sweetener and grind it up to a powder which works best in some recipes and much cheaper.

Again, the grinder is wonderful for this purpose.

Once cut we managed to get 24 Keto pumpkin cheesecake bars however you might get more if you cut them smaller.

Before we cut the bars we cooled them and then froze them just enough to get a clean cut from them.

Cut the edges off as well if you want the perfect bars  and then you can eat that up in a big bowl as your tester bowl, haha.

You can freeze up to 6 months but they won’t last that long.

Mrs. CBB has one pumpkin cheesecake bar out every day for her breakfast fat bomb and I sneak one every once in a while.

If you really want to get fancy add some whipped cream on top but honestly they are perfect as they are at room temperature.

Happy Keto Fall to all!!!

If you fancy some sugar-free vanilla ice-cream or whipped cream on top you might as well go all out and add sugar-free caramel sauce.